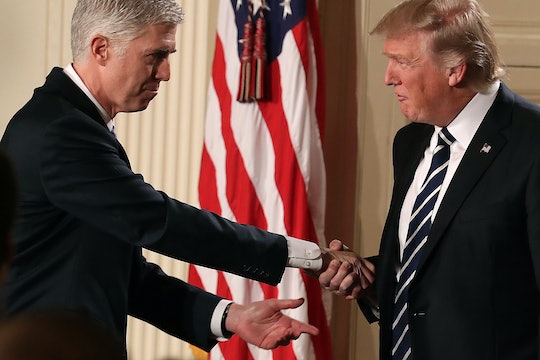 Did Neil Gorsuch Support Trump In The Election?

On Tuesday, President Donald Trump announced his pick to fill the vacancy left by the late Antonin Scalia on the Supreme Court bench: Justice Neil Gorsuch. Gorsuch currently sits as a justice on the U.S. 10th Circuit Court of Appeals based in Denver, Colorado. The GOP has praised Trump's conservative SCOTUS selection, while Democrats have already begun to voice opposition since Tuesday night's announcement from the White House. For some legal experts, Gorsuch seems like a non-obvious pick who wasn't immediately on their radar, leading some to wonder: Did Neil Gorsuch support Trump during the election?

While Gorsuch was on Trump's long list of potential Supreme Court nominees, it wasn't until shortly before the president's announcement that some began to focus more closely on the likelihood of Trump nominating Gorsuch. Unnamed sources close to the SCOTUS selection process told USA Today that Trump "hit it off personally with Gorsuch." But what does Gorsuch think of Trump, and, more importantly — did he support Trump when he was the Republican candidate for president last year?

According to campaign contribution records from the Federal Election Commission, Gorsuch has contributed more than $3,000 to GOP candidates from 1999 to 2004, namely the campaigns of George W. Bush, John McCain, and the Republican National Committee. There's really nothing shocking about those contributions, as during this time, Gorsuch was an associate attorney and eventual partner with Washington, D.C. law firm Kellogg, Huber, Hansen, Todd, Evans & Figel. As far as the FEC was concerned, he was a regular citizen who complied with federal individual campaign contribution laws.

When Gorsuch became a U.S. Circuit Court justice, a new set of campaign contribution ethics rules came into play, as required of all U.S. justices and judges. The Code of Conduct for U.S. Judges explicitly states that "A Judge Should Refrain from Political Activity." This includes holding office in any political organization, making speeches for a political organization or candidate, or making contributions to political organizations or candidates. As it stands, there appears to be nothing of record from Gorsuch speaking or writing about Trump during the election cycle, as it would be at issue with the Code of Conduct.

That's one of the reasons Supreme Court Justice Ruth Bader Ginsburg came under such fire last year for her comments about Trump, calling him a "faker" while he was still on the campaign trail. (Whatever Ruthie, I still heart you. Notorious RBG 4 life.)

While Democrats have continued to voice their opposition against Trump's SCOTUS pick, Gorsuch may not have as hard a battle ahead of him even with Democratic pushback: His 2006 Senate confirmation hearing for his appointment to the 10th Circuit Court took all of 20 minutes.