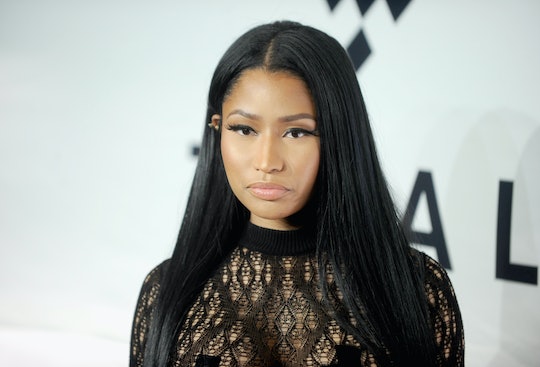 Taylor Swift is having quite a week. After creating buzz on social media through the use of unexplained snake videos (more on that later), the singer announced her upcoming album on Wednesday, and on Thursday night, she released the first song, "Look What You Made Me Do." But where Swift goes, drama follows, and now fans are wondering, did Nicki Minaj just tweet about Taylor Swift? It kind of seems that way, if you know the back story. And trust me, there is a lot of back story.

Here are the facts: Minaj is featured in three (yes, three) new songs that were released on Thursday, and spent the evening promoting them on Twitter. Around 11:30 p.m., Swift tweeted the release of her new song. Less than an hour later, Minaj sent one tweet that was very different from the rest: "N*gga sit down. Be humble." She then went back to promoting her tracks with no explanation, but fans were quick to respond, questioning if Minaj was addressing Swift. Some argue that the tweet was merely a reference to Kendrick Lamar's "Humble," released back in March, the lyrics of which contain all of those words, but never in that particular order. It also seems like an odd time to misquote a random song, but what do I know?

If you're on top of all the celebrity drama, you're probably ready to make your own judgement at this point. If not, you're probably wondering why Minaj would even bother sending this tweet. It'll take a quick lesson on the three separate and ongoing feuds to get up to speed. And if that seems like it's not a good use of your time, just think of it as training for when your kid's a teenager, and she comes home fuming about how Emma C. told her that Charlie M. said she was stuck up, but that's only because he doesn't realize that she wrote that note about Mason R., not Mason S., and why is everything so unfair?! In the music industry, it seems, the teen phase lasts well into one's 30s.

Let's get down to it: in 2015, when Swift's "Bad Blood" video was nominated for an MTV award while Minaj's "Anaconda" was snubbed, Minaj complained on Twitter that videos celebrating "women with very slim bodies" received preference. Swift took that as an insult, and accused Minaj of "pit[ting] women against each other," according to Rolling Stone. After some back and forth, Swift came to learn that Minaj's beef was with society (and maybe MTV), and not with her. Swift apologized, and the two supposedly made up.

However, during the brief feud, Katy Perry inserted herself into the drama by tweeting that she thought it was "ironic to parade the pit women against other women argument," because Swift's video "unmeasurably capitalizes on the take down of a woman." Confused? "Bad Blood" was rumored to be a reference to a year-long (at that point) feud between Perry and Swift, wherein the two disagreed over who had the right to employ a few backup dancers (who, it must be noted, are adults capable of deciding with whom they wish to work). The Minaj-Perry alliance was solidified by Minaj's cameo in Perry's new song, "Swish Swish," her response to "Bad Blood" that was released the day before "Look What You Made Me Do." Perry and Minaj also collaborated with Swift's ex, Adam "Calvin Harris" Wiles, which is interesting.

While "Look What You Made Me Do" didn't appear to reference the Swift-Minaj beef (perhaps because Swift was under the impression it ended two years ago), it does seem to address Perry, as well as Swift's beef with Kanye West, which goes back to his scene-stealing moment at the 2009 VMAs. Swift forgave West in 2015, and made nice with him and his wife, Kim Kardashian, but in 2016, West released a song containing the lyrics "I feel like me and Taylor might still have sex/Why, I made that b*tch famous," which Swift publicly objected to. West and Kardashian claimed that Swift had approved the lyrics, which she denied. Then Kardashian leaked a recording of West and Swift discussing the song. The "b*tch" line was not discussed, according to People. Kardashian and her fans then began using a snake emoji to taunt Swift on social media.

In that context, it makes sense that Swift used snake videos to tease her upcoming album, now doesn't it? Also of note: in an apparent response to taunts from Swift fans, Kardashian has now blocked the snake emoji on Instagram. So, are Minaj, Kardashian, West, and Perry all sitting around with a burn book, plotting their next attack on Swift? Anything's possible. But maybe we should all just ignore the drama and listen to the music, instead.