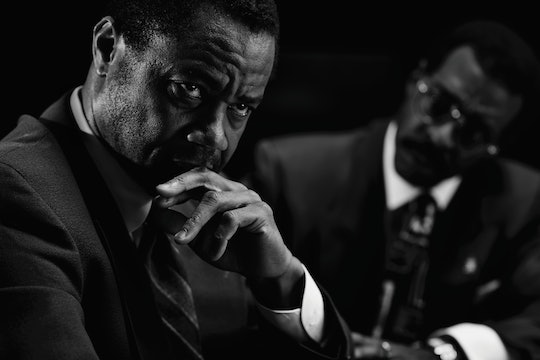 Did O.J. Simpson Really Attempt Suicide In Kim Kardashian's Bedroom? 'American Crime Story' Has A Source For The Dramatic Scene

The premiere of The People v. O.J. Simpson: American Crime Story starts with a double murder, and nearly ends with another death. In the final moments of the first episode in the 10-part FX series, Cuba Gooding, Jr. as O.J. Simpson considers committing suicide in Kim Kardashian's bedroom. No, that's not a Mad Libs synopsis — fans of true crime and the Keeping Up With The Kardashians family are quite aware of the reality TV's connection to the Trial Of The Century. Robert Kardashian, Kim & Co's father, was Simpson's close friend and defense lawyer. (And Kris Jenner was best friends with Nicole Brown Simpson, the victim in the 1994 murder Simpson was accused of.) But did the premiere's final scene actually occur in real life?

According to one source, it did. But not quite how it was depicted in the TV series. In The People v. O.J. Simpson's premiere, Simpson — who had just written his will — is seen holding a gun to his head in front of David Schwimmer's Robert Kardashian, who then urges his friend not to kill himself "in Kimmy's bedroom." (Simpson says beforehand, "It's better for everybody ... This situation has gotten real bad," presumably referring to his inevitable arrest.)

In real life, however, the alleged scene played out differently. Lawrence Schiller — who released a book on the case, American Tragedy: The Uncensored Story of the O.J. Simpson Defense — spoke to ABC News in September about Simpson's alleged suicide attempt following the death of his ex-wife, Nicole. Schiller said he learned about the incident when speaking with Kardashian about the events prior to Simpson's arrest. According to the author via the defense attorney, instead of waving a gun, Simpson sat in Kim's room to record a suicide tape. Said the now-deceased Kardashian:

Then O.J. said, 'I'm going to kill myself in this room,' and I said, 'You can't. This is my daughter's bedroom. My little girl Kim sleeps here. I can't have my little girl in this bedroom, and every time I come in here, I'm going to see your body lying in this. You can't do that.'

(Simpson's legal representatives have yet to respond to Romper's request for comment regarding the veracity of the scene.)

Though we can't say conclusively whether or not the scene did happen until Simpson confirms it himself, Kardashian's word is an authoritative one. As those who watched American Crime Story now know, Kardashian was quite close to the source material during the unfolding of events.

Now, whether or not little Kimmy owned the Joey McIntyre poster seen in the background on American Crime Story is up for debate. But, like, who wasn't a Joey McIntyre girl in 1994?