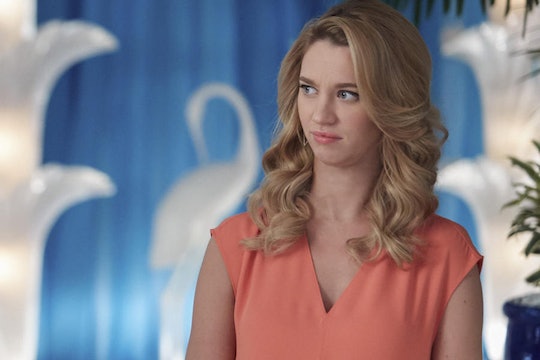 Petra May Be Getting A "Killer" Arc On 'JTV'

Even though Jane the Virgin jumped three years into the future, it's still the same drama-filled show it always was, and this was made immediately clear when Scott's corpse was found at the end of the first episode since the time jump. And while there are plenty of suspects out there on this show, most fans are wondering if Petra killed Scott on Jane the Virgin, given the longstanding animosity that's existed between the two of them since practically Day One.

Yes, there was obviously no love lost between Petra and Scott. After Anezka put Petra in a comatose state, Anezka pretended to be Petra and fell in love with Scott. Once the truth was revealed, Anezka and Scott continued their romance and even went so far as to get married. Scott used the amendment to Rafael's father's will to blackmail Petra so that Anezka could still spend time with Petra's daughters. However, after the time jump, something obviously had changed in this dynamic since neither Scott nor Anezka were anywhere to be found. Rafael first brought up that fact when he asked Petra, "Whatever happened to that guy?" (Meaning Scott.)

Petra looked pretty sketchy and somewhat guilty when she said that she hadn't seen Scott since he and Anezka split up. It definitely seemed like she was lying, but her shock when she saw Scott's dead body looked legit, so did she do it or not? Well, she definitely has the motive, but Petra just doesn't seem like the type to commit cold blooded murder. She's much more into blackmail and manipulating other people to do her dirty work for her.

My guess is Petra didn't kill Scott, but she knows who did and she obviously wasn't all that upset about his death. Petra either hired someone to kill him or teamed up with someone who also stood to gain something from Scott's murder. The most likely accomplice is Anezka, especially since she and Scott apparently broke up. However, while Petra has a clear incentive to want him gone for good, I can't imagine what Anezka's motive would be. My guess is it would've had something to do with why she and Scott went their separate ways.

Hopefully Anezka will appear in the next episode and fans can get some more answers. She's been mysteriously absent thus far and one has to wonder why and what she's been up to for the past three years.