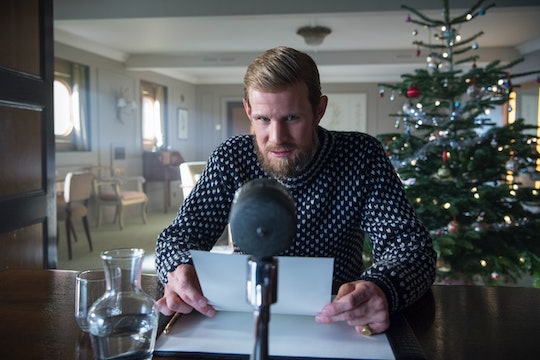 Prince Philip's Behavior On 'The Crown' Is Worrisome

Settling into the Cold War era, the drama on The Crown heats up between Queen Elizabeth II and her husband, Prince Philip, the Duke of Edinburgh, and not in a good way. In fact, the series seems to be heavily hinting at the possibility of infidelity. So did Prince Philip have an affair on The Crown? He may be married to the queen, but that doesn't mean that Philip doesn't have a wandering eye. The first season saw the duke acting out by learning to fly and spending an awful lot of time at his gentlemen-only lunch clubs, but the second season takes it a step further. Warning: spoilers for Episode 2 ahead!

Queen Elizabeth may be the star of the show, but Prince Philip, played to swaggering perfection by Matt Smith, is constantly struggling for his moment in the sunshine. For that reason, the queen and her mother decide to send him abroad in the second episode, where he seems to relish the attention lavished on him. He also meets an attractive journalist on his trip. From the moment the two exchange flirtatious glances from across the room, it's pretty clear that this relationship won't stay strictly professional. In their first interview, Philip's demeanor is distinctly flirtatious, though that switches immediately when she starts asking probing, difficult questions. Though this should be as large an indicator as anything that he's not opposed to cheating on his wife, it wasn't the first sign of trouble.

In the first episode, Elizabeth found a photograph of another woman in Philip's briefcase. She soon discovered that her name was Galina Ulanova, a ballet dancer. She never spoke to the woman to confirm any of her suspicions, but she did go see her perform, which did nothing to make her feel any better, as you can imagine. Regardless, it didn't show Philip in a very good light based on the information given to us.

Another potential problem for Philip (and all of the people responsible for maintaining the royal family's image) happens as Mrs. Parker starts looking for a divorce. Mrs. Parker is married to Mike Parker, Philip's private secretary and best friend. In an effort to secure a divorce from her husband, Mrs. Parker starts looking for evidence of an affair. She tracks down a waitress who works at the lunch club Philip and Mike founded, and finds that the waitress has indeed had an affair with Mike. As the poor woman inches closer to getting her divorce, men working for the royal family begin getting worried that newspapers will make the "not unreasonable assumption" that anything Mike has done, Philip has done too. And that includes things like cheating on one's wife.

In real life, though rumors have abounded for years, there has never been any hard evidence that Prince Philip ever stepped out on Queen Elizabeth. One biographer, Sarah Bradford claimed outrightly in her book Elizabeth II: Her Life in Our Times that Philip had been unfaithful. However the Duke himself as well as the women implicated and various family members have all categorically denied the stories of infidelity, so be careful to not immediately assume this to be a fully accurate portrayal of Elizabeth and Philip's marriage.

Now is a good time to remember that though it is based on historical events, The Crown remains a work of fiction. Its primary goal is not actually to lift a veil on the internal lives of royals — that is what documentaries are for. The primary goal of the show is to entertain and maintain an audience. And it is simply true that a Prince Philip who feels emasculated and engages in clandestine affairs is far more interesting television-wise than a Prince Philip who occasionally makes crass jokes but remains a steadfast husband.