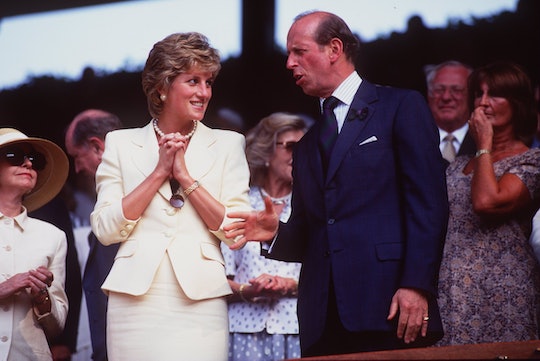 When Princess Diana married Prince Charles in 1981, she'd been largely characterized by the press as "the girl next door." But did Princess Diana have royal blood? Although not a princess in the traditional sense, the late Princess of Wales did come from a family with serious connections to the royal family.

Despite what everyone called her, Princess Diana was not born a princess. The Queen gave Diana the official title of Her Royal Highness, the Princess of Wales, following her marriage to Prince Charles on July 29, 1981, according to Metro. When shortened, the title became Diana, Princess Of Wales. But had Diana been a princess in her own right, Metro explained that her title would have included the "Princess" label ahead of her name rather than after it as is seen used with the formal title for Prince William's daughter, Her Royal Highness Princess Charlotte of Cambridge. But despite not being a true princess, Diana has continued to be known as "Princess Diana" for more than 20 years after her untimely death in 1997. What's more, she had more of a connection to the royal family than the average person does.

Known as Lady Diana Spencer prior to her marriage to Prince Charles, Diana was the youngest daughter of the eighth Earl Spencer, according to the BBC. He reportedly served as an officer in the royal households of King George and Queen Elizabeth II, according to People. But Princess Diana's father wasn't the only family member to have connections with the royal family.

In fact, as TIME pointed out in a 1981 profile of Princess Diana and her family history, a number of royals befriended members of the Spencer family over the years. "Diana's brother, Charles, 16, is Queen Elizabeth's godson," according to TIME. "Her father, the very wealthy eighth Earl Spencer, is the late Queen Mary's godson, as well as former personal aide to both King George VI and the present Queen. Her maternal grandmother, Lady Fermoy, is a lady in waiting to the Queen Mother."

And a separate TIME story on Diana's engagement to Prince Charles published in 1981 surmised that she had "more English royal blood in her veins than" her fiancée due to what they called "illegitimate unions." Four of Diana's ancestors, according to TIME, were apparently known to have been mistresses to English kings, specifically King Charles II and King James II.

Beyond that connection, Diana herself was reported by The Sun to be Prince Charles' 16th cousin once removed. The two reportedly met as children when Diana's family rented Park House from Queen Elizabeth II and Diana was, according to Biography.com, a playmate of one of Charles' younger brothers. Talk about a small world, right?

Although not a princess in the traditional sense as the world knows royal family members like Princess Charlotte and Princess Beatrice, for example, Diana continues to be known as both "Princess Diana" and the "People's Princess" due to her humanitarian work and widespread popularity, two titles that not even a lack of royal blood can take away.