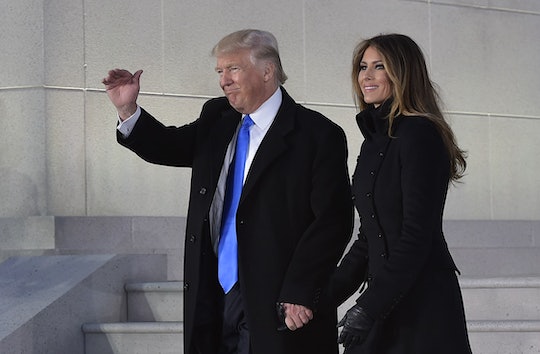 Although many designers issued statements saying that they would not dress Melania Trump, she ended up wearing a very presidential-looking baby blue dress on Friday morning. Reportedly, Ralph Lauren dressed Melania Trump for the inauguration, which would be a bold move for the designer. She allegedly picked up most of her outfits for the week from the American designer. According to Women's Wear Daily, Ralph Lauren, who was an ardent Hillary Clinton supporter and dressed her throughout the campaign, stepped up in a bipartisan move to dress the soon-to-be first lady for this historic weekend. He also allegedly made the gown that she will wear at the inaugural ball as well.

Her inauguration ceremony dress was everything you'd expect from the designer. It was a two piece sweater dress — so she could be warm without a coat, which was pretty smart — that she wore with gloves and a pair of matching heels. It was a mix of Princess Diana and Jackie Onassis — super classy and glam.

Almost too close — Elle noted that the outfit was almost a an exact replica of what Jackie O wore to her husband's inauguration in 1961, minus the hat, which was probably what Ralph Lauren and his team were going for. The outfit was gorgeous, but you can sort of see how Lauren might not have had his entire heart in the look (and blatantly referenced Onassis' iconic outfit) for the controversial first lady.

OK, I know that we shouldn't dwell on what a first lady is wearing more than what she plans on doing , but first ladies and their fashion choices are important. Just like it matters what celebrities wear on the red carpet of an award ceremony. The clothing choices can send a message about their personality and the prestige of the office. Melania hit the proverbial nail on the head.

According to Marie Claire, many designers refused to dress Melania for the big event, given the policies that her husband ran on throughout the campaign. Trump's idea of building a wall to block out Mexicans, ban Muslims, and the fact that he has aligned himself with Mike Pence, who holds unabashed LGBTQ views alienated many in the fashion community.

Marc Jacobs, for example, told WWD, "I have no interest whatsoever in dressing Melania Trump... Personally, I'd rather put my energy into helping out those who will be hurt by [Donald] Trump and his supporters."

Given the backlash, it's a good thing that an American designer like Ralph Lauren eventually did step up to dress the first lady for the ceremony and the ball. But remember, that just because she's wearing his work, doesn't necessarily mean that he supports her husband or his politics.