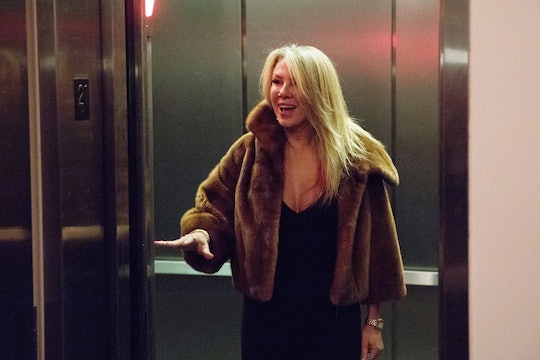 'RHONY' Is Getting Political

The Real Housewives of New York's newest season has been teasing 2016 election drama since the trailer first dropped, and it looks like we're finally going to see what went down at Carole Radziwill's election night party during Wednesday's May 3 episode. The former journalist was deeply embedded in the unfolding presidential race and is obviously a staunch Hillary Clinton supporter. But some of her less politically involved castmates didn't exactly share her passion. This seems to come to a head when she doesn't invite Ramona to her election night party. So did Ramona Singer vote for Donald Trump? It seems like their fight stemmed from Ramona's political indifference more than anything else.

Carole assumed Ramona would be voting for Trump just because she didn't support Clinton. But at her party in the Hamptons, Ramona clarified that she wouldn't be voting for anyone. (Sonja scolded her friend for this and told her that she had to vote.) Obviously, we have no way of knowing how Ramona actually voted, but Carole has every right to surround herself with like-minded, supportive friends at her own party. She assumed Ramona wouldn't have fun and told her she didn't think she should come. Ramona invited herself anyway and basically forced Carole to ban her from attending.

Whether Ramona voted for President Trump or not at all is her business. But inviting herself to a party where her presence was virtually guaranteed to cause conflict — especially if it's true that Ramona was less invested in the election that Carole and her friends were — isn't cool. It'll be interesting to watch the election play out on the show at Carole's party and to see the cast's reaction in real time. It's also been pointed out this season that Sonja was a former Trump brand consultant in the early 1990s, but she remained mum on whether or not that meant she supported him. The way Dorinda called her out on it made it seem like Dorinda herself was a Hillary supporter.

We know where Carole stands, and Bethenny — although she seems annoyed by how politically cued in Carole is — also seems to be in support of Clinton. The trailer shows Carole ending the night in tears, but we'll have to wait and see whether the results cause a permanent rift between her and Ramona this season. No matter what happens, it's always refreshing to see Housewives getting politically involved and invested in feminist causes. It'll be interesting to see how Carole processes the upset after such a tumultuous race.

More Like This
Pregnant Chrissy Teigen Cracked A Joke About Trump As She Shared A New Ultrasound Photo
Netflix Reveals The Official Teaser Trailer for Wednesday
Kristin Bell Shared Some Sweet, Rare Photos Of Her Daughters From A Family Vacation
What Parents Need To Know About Marvel's New She-Hulk Series Coming To Disney+