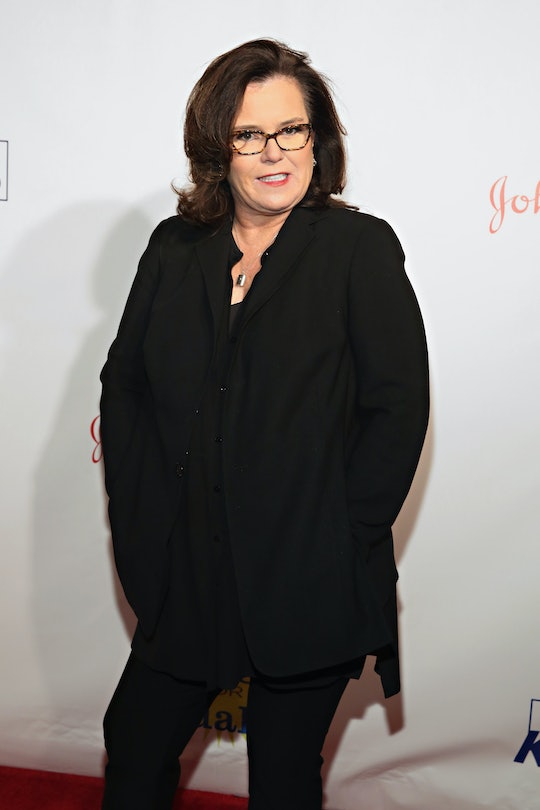 Did Rosie O'Donnell Respond To Donald Trump's Debate Comments? Of Course She Did

During the first presidential debate on Monday night, there was at least one person who got dragged into the fray who probably wasn't expecting to be involved. Near the end of the debate, when Democratic presidential nominee Hillary Clinton brought up Republican candidate Donald Trump's treatment of women, he responded by saying, "Rosie O’Donnell, I said very tough things to her, and I think everybody would agree that she deserves it, and nobody feels sorry for her." Rosie O'Donnell quickly responded to Trump's debate comments, though, and shut him down in a matter of a few tweets.

When one Twitter user, Emily Wilson, tweeted, "'Member the debate in 2016? OH YA! Rosie got burned so hard by President Trump!" O'Donnell ignored the personal jab and quickly fired back, "HE WILL NEVER BE PRESIDENT."

O'Donnell also uploaded a video of her daughter Dakota to Twitter titled "the art of the deal" (seemingly in reference to Trump's book), in which O'Donnell tried to cajole Dakota into going to bed. She captioned the video, "while not watching," so it seems like O'Donnell may not have been following the debate when Trump chose to comment on her.

O'Donnell responded to another tweet that supported her later in the night. When Twitter user Kim Richardson tweeted, "I'm with Hillary Clinton but I'm also with Rosie. Trump is a bully & we must insist he stop his attacks on her," O'Donnell responded, "God love ya kim - thank u from my heart."

Not all of O'Donnell's responses to Trump's comments were low-key, however. She also tweeted a video of herself on The View in 2006, explaining that the footage was "the 5 mins orange anus can't seem to get over." In the video, while discussing Trump's decision regarding a beauty queen's continued participation in the Miss USA competition, O'Donnell said she didn't "enjoy" Trump and called him a "snake-oil salesman on Little House On The Prairie," according to CNN. Needless to say, this kicked off a massive feud between the two celebrities.

Soon after, Trump called her "a loser, a real loser," "crude, rude, obnoxious and dumb," and "nice fat little Rosie."

In 2014, O'Donnell spoke out about the bullying she received from Trump. "Probably the Trump stuff was the most bullying I ever experienced in my life, including as a child," O'Donnell said, according to CNN. "It was national, and it was sanctioned societally. Whether I deserved it is up to your own interpretation."

It looks like Trump wasn't quite willing to let go of that rivalry, even when it came to a presidential debate. And, true to form, O'Donnell stood up for herself just as effectively as she always has.