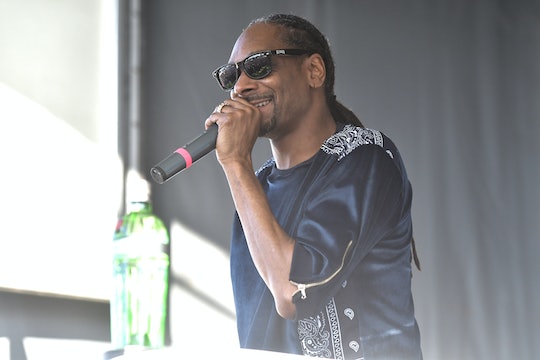 America's favorite rapper/youth football coach/cooking show star might be in a bit of trouble this week. After a video is which he mock-assassinates the president, some are wondering, did Snoop Dogg break the law? Some are calling the video a direct threat against President Donald Trump, and Trump responded to it on Wednesday morning. In typical Trump fashion, he claimed that Snoop's career was "failing" and insinuated that he should be jailed. Trump's attorney, Michael Cohen, granted an interview to TMZ (as is customary) during which he called the video "not artistic" and "not funny," and demanded an apology from the rapper. Snoop's rep did not immediately return a request for comment.

"He has to learn that they need to respect the office of the president," Cohen told the celebrity gossip site, in what appeared to be a Skype interview delivered from a crowded airport. Cohen twice invoked former President Barack Obama's name, and also mentioned "inner cities," a phrase Trump is fond of bringing up around certain demographics. Cohen and Trump both claimed that had Snoop made a similar video that referenced Obama rather than Trump, he would have faced serious consequences. Snoop is, of course, not the first musician to express strong negative feelings about the president, and it's fair to assume that he won't be the last.

Immediately following the election, Rick Ross released a video for "Free Enterprise," in which he uttered the phrase, "Assassinate Trump like I'm Zimmerman," and Big Sean freestyled on a morning radio show last month "And I might just kill ISIS with the same icepick/That I murder Donald Trump in the same night with." Rapper Renizance recently claimed that he was investigated by the Secret Service after releasing a track called "Trump Dies," and Madonna was also reportedly investigated after she mused about "blowing up the White House" at the Women's March on Washington, though apparently it didn't lead to any charges. For comparison, Snoop pointed a toy gun at a Trumpish-looking clown in his video and pulled the trigger, upon which a flag bearing the word "Bang" unfurled (skip to around the three-minute mark if you don't have time to enjoy the whole thing right now).

But is that a crime, or nah? United States Code Title 18, Section 871 states that it's a felony to threaten the president, but the question is whether pretending to shoot a clown with weird hair and an extra-long tie actually amounts to a real threat. According to the U.S. Attorneys' Manual, it doesn't count if a "reasonable person would interpret them as mere political hyperbole, idle talk, or jest." In Watts v. United States, the Supreme Court held that the statement, "If they ever make me carry a rifle, the first man I want to get in my sight is L.B.J" was hyperbole, and did not constitute a threat. And of course, Trump himself was not tried for musing on what would happen if former Secretary of State Hillary Clinton's security team was disarmed, or implying that "Second Amendment people" could prevent her from fulfilling certain presidential duties. I think it's safe to say that Snoop won't be on trial for this one.