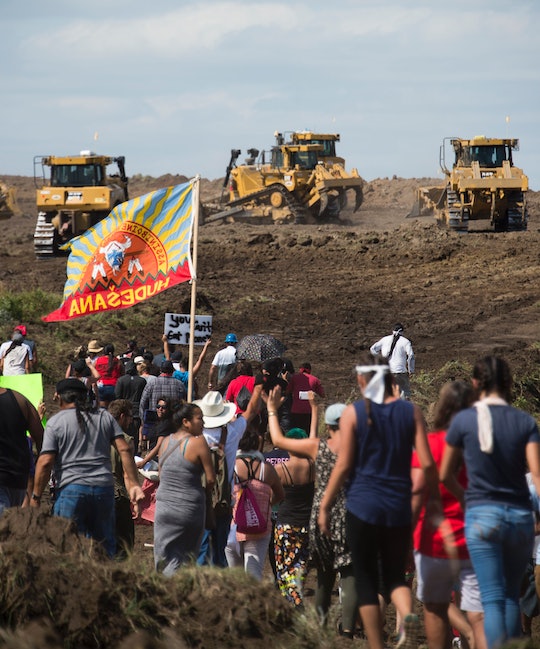 Did Someone Really Donate $2.5 Million To Standing Rock? It's Likely A Rumor

The Dakota Access Pipeline being built underneath the Missouri River, which is the only source of drinking water for the Native American tribe Standing Rock Sioux, has stirred controversy and disgust around the country. Activists and supporters are making it loud and clear that it's extremely important to help protestors finance their legal fees in order to keep the protest going. After a large confrontation leading to the arrest of more than 100 protestors late last month, reports surfaced that an anonymous donor contributed millions to the cause. But did someone really donate $2.5 million to Standing Rock? Or is this just a rumor?

On Oct. 27, tensions rose between activists and law enforcement, who arrested more than 140 protestors, The Washington Post reported. One of the protestors who was arrested was Caddo Nation chairwoman Tamara Francis-Fourkiller.

Reportedly, Francis-Fourkiller's family members told News 9 that on Oct. 29, a donor contributed $2.5 million to release all of the Standing Rock protestors who were arrested. Oklahoma City News 9 was the first to report the donation.

News of the donation spread to several outlets, including The White Wolf Pack blog. However, since the reports were first released, questions about the validity of the donation have been brought up.

The Red Owl Legal Collective, which provides legal support for Dakota Access Pipeline protesters, denied the reports of a $2.5 million donation on its Facebook page:

The Red Owl Legal Collective, who appeared at the bond hearings for those arrested, absolutely denies that any such contribution was received or used for bail money, vehicle forfeiture money, or in any manner for the defense of those arrested. We question the validity of the statement from "The White Wolf Pack" or any other media source, and we are concerned that this false assertion will deter people from contributing to the organizations who have been involved in posting bail for and defending the water protectors.

Romper reached out to Oklahoma City News 9 for comment, but they did not immediately return the request.

The New York Times reported that more than 400 protestors have been arrested. One protestor, activist Mekasi Horinek, described what his arrest was like. He said he and the other arrested protestors were "zip-tied," and spent the night "in cages" in a parking garage.

“No matter what they do to us, they’re not going to strip our dignity, our honor,” Horinek told The New York Times. “These are things we hold in our DNA, and we’ll never lose.”

Horinek said he bailed himself out of jail with money he'd saved in case he got arrested — so if there was a $2.5 million donation to free him and the other arrested protestors, none of that money reached him.

Some of the protestors were arrested for trespassing, because the sacred burial grounds he and many others protested on at Standing Rock were sold to the Dakota Access Pipeline project owners. Some have called the police's treatment toward the activists "aggressive."

But what's important to remember is that you don't need to donate millions of dollars to make a difference. Those who wish to support the legal defense of Dakota Access protestors may contribute to the Sacred Stone Legal Defense Fund here.