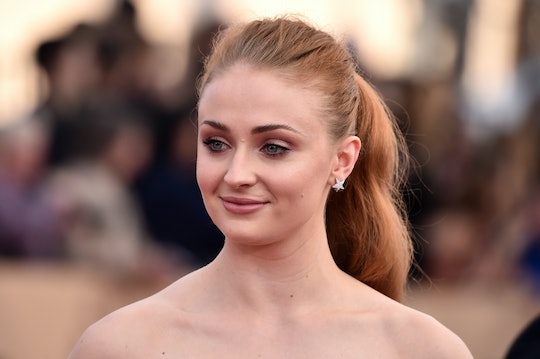 Did Sophie Turner Reveal That Sansa Is Not Dying On ‘Game of Thrones’? She Just Dropped A Huge Hint

Be still my slow-beating heart. Sophie Turner showed up on E!'s red carpet coverage and might've dropped a huge, huge Game of Thrones spoiler. (And we all thought Jon Snow coming back from the presumed dead was a big deal.) If I heard her correctly (and trust me, I did — I pressed rewind like, nine times), Sophie Turner revealed Sansa Stark doesn't die on Game of Thrones Season 6. At least, that's sure as hell what it sounded like she said.

With so much still up in the air on this season — and so much speculation over who'll live to see the light of day in Westeros — the fact that Sansa Stark stood on the E! stage and said, "I'm like flicking through [the script] saying, death, death, death, death ... alright, I'm good for this season," the only possible conclusion to draw is that Sansa does live. And uh, as a Game of Thrones nerd, this is a really, really, really BIG reveal. Obviously the show's creators could change their minds at just about the last second and kill off another one of our beloved Stark characters, but after all Sansa's been through (and, TBH, after all we've had to endure watching her character get the shaft time and time again), we deserve Sansa Stark alive and well at the close of Season 6. Hell, we've all earned it.

Here, check it out for yourself:

OK, OK, I know it's not a dead giveaway or anything concrete here, but it's enough to comment on, and judging from what she says, it seems like it's pretty good intel. Aside from Turner's accidental admission on live television, there's anothe reason I think she'll live to see Season 7: Nothing remotely great has happened to Sansa yet. In fact, she's been dealt the shortest straw on the show time and time again. She wrongly believes she's marrying the "love of her life" when paired with Joffrey Baratheon; her father is then beheaded and she's forced to view his head on a stick; her then-husband takes a liking to cruelly torturing his wife (emotionally and physically, by way of proxy); her mother-in-law hates her; her family is killed off; she's then married off to Tyrion (arguably the best thing to happen to her); escapes with Lord Baelish only to become a pawn in his sick and twisted game; and is then married off to the WORST person ever, Ramsay Bolton. As if all that wasn't enough, Sansa is then raped on her wedding night.

The one strand of hope Season 5 gave us for Sansa Stark came from watching her jump off the side of a building. So I'm not wrong for hoping she makes it to through Season 6 unscathed. More than anything, I'd really love to see Sansa's character endure a season of uplifting moments for once — and that includes staying alive until the beginning of Season 7. I know better than to hope she'll be alive for two more seasons, so I'll just bank on seeing her during Season 6.