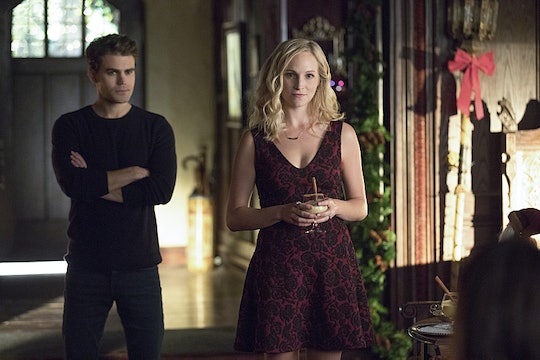 Did Stefan Turn Off His Humanity On 'The Vampire Diaries'? The Ripper Is Back

As soon as the Salvatore brothers made that deal with Cade, I knew it was bound to lead to no good and Friday night's episode of The Vampire Diaries Season 8 winter finale only confirmed those fears. Because now Stefan isn't just grudgingly going into this arrangement — he's looking forward to it. Or at least that's what that grin which spread across his face during the final few moments implied. So does this mean Stefan turned off his humanity on The Vampire Diaries? I'm afraid that's precisely what happened, my friends.

Before embarking on his journey as a siren, Cade requested a one-on-one meeting with Stefan, which involved taking a trip down memory lane to the days when Stefan was a full-on ripper. As you all know by now, Stefan was not the nicest guy when he flipped that humanity switch off and fully gave into his cravings for blood. In fact, there were times that he made Klaus Mikaelson look somewhat innocent. However, that's not the only reason Cade wants Stefan as his immortal servant.

Shortly after one of his binges (aka killing an entire village of humans on Christmas no less), Seline came across Stefan with the intention of killing him. But when she read his thoughts she realized that despite the horrible things he's done, his mind was full of kindness and remorse. That's the type of person Cade is looking for. Because despite his intentions to be good, he has a tendency to bring people into his darkness... like what he did to Elena.

That's right, Cade brought Elena into this trip down memory lane. He reminded Stefan that he was the one who inserted himself into Elena's life because he just had to know her. And even though Stefan never intended to bring so much pain and suffering into her life, that's precisely what happened. So Cade wants Stefan to use that ability to help good people get in touch with their inner darkness. Those are the kind of souls he most wants to consume.

But in order to do that in a timely fashion and allow Stefan to only be indentured to him for a year, he had to agree to give in once more to the worst side of himself. So as he drove away with Damon, he did the one thing he knew he must in order to survive the next 365 days: he flipped off his humanity switch and became The Ripper once more.

Get ready to see Evil Stefan when the show returns in January. Something tells me it's going to be a bloody good time.