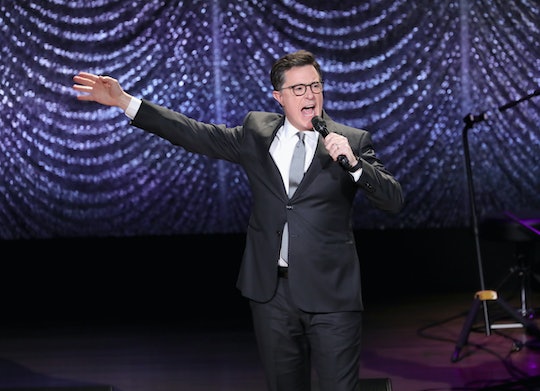 Was Stephen Colbert's Trump Joke Too Much?

It's been an interesting 48 hours for late night network television. On Tuesday, America woke up to Jimmy Kimmel's emotional story about his newborn son and the health care debate. But on Wednesday morning, social media is calling on CBS to #FireColbert. So, what prompted late night TV's about face? It's no secret The Late Show host dislikes President Donald Trump. But Colbert's comedic rant against the president went to an entire new — and shockingly vulgar — level on Tuesday night, even for the Comedy Central veteran. Did Stephen Colbert go too far with his Trump joke?

First, the setup. On Sunday, Trump appeared on CBS News' Face the Nation in an interview with John Dickerson. In yet another "look how clever I am" jab at the media, Trump told Dickerson, "I love your show — I call it 'Deface the Nation.' But, you know, your show is sometimes not exactly correct." Let that sink in for a second: The 45th president of the United States just openly mocked the journalist interviewing him on a news show to which he was invited.

On Tuesday's The Late Show, Colbert preceded his response to Trump with a simple justification: "When you insult one member of the CBS family, you insult us all." Colbert went on a series of pretty solid zingers against Trump, before lobbing this lurid bomb: "In fact, the only thing your mouth is good for is being Vladimir Putin’s c*ck holster."

First, let's get the most obvious thing out of the way: Colbert's joke crossed the line from smarmy political criticism into what seems like homophobia. "That's so gay" — and all its variations using the LGBTQ community as the butt of jokes — have never been funny or appropriate. What Colbert said, regardless of to whom he was referring, was homophobic, demeaning, and just raunchy — full stop. And he shouldn't get a pass for it just because he's late night TV's highest paid host or because he made the joke after 11:30 p.m. Representatives for CBS did not immediately return Romper's request for comment.

But on the other hand, I empathize with Colbert's frustration — especially as someone who not only works in the news, but is the daughter of a photojournalist. Let me be very clear: I am in no way condoning what Colbert had to say, because it was wrong on so many levels. What I am saying is that I understand how someone whose profession is assaulted by the commander in chief on a near daily basis can reach the boiling-over point. When the president calls the media "the enemy of the people," things are going to get ugly and combative.

Unfortunately for Colbert, it seems he — or his writers — let their frustration get the better of them. Should Colbert, or whoever wrote the joke, be fired? He certainly wouldn't be the first media personality to lose his job for homophobic remarks made on air: Just ask former Brady Bunch star Susan Olsen, who was fired from her radio show after going on a homophobic rant on air in December. As for precedent at CBS, 60 Minutes correspondent Andy Rooney was suspended for three months for making homophobic remarks on air back in 1990.

This is where, as a journalist, I have to take a step back and dial down my emotional response — which I will freely admit I'm having a hard time doing, given the inflammatory factors surrounding this entire situation with Colbert's joke. Can Stephen Colbert say what he did? Of course he can. That's the beauty of the First Amendment. But does that mean what he said comes without consequences? Absolutely not. Does the president get to dictate what those consequences should be? Nope — because Trump isn't Colbert's boss, and it's up to CBS to figure out what repercussions there might be for anyone involved.

Trump supporters are offended by Colbert's joke, enough to spearhead a fervently vocal #FireColbert campaign on Twitter Wednesday. These are the same supporters who told people offended by Trump to get over themselves during his entire slog of a racist, Islamophobic, misogynistic presidential campaign. You know, the presidential campaign where Trump openly mocked a disabled reporter and video surfaced of Trump saying he could grab women by the "p*ssy," without their permission.

Calls for Trump to end his campaign after those remarks were just as loud — if not louder — than #FireColbert is today. But look who still made it to the White House? It's as though there were no consequences at all for Trump, no matter how vile his remarks were. Colbert or his writers don't deserve a pass any more than Trump somehow managed to get — and continues to, despite being leader of the free world.

But what a sad state of affairs we have come to, when the president mocks the press and a good comedian might face more consequences than Trump ever did.

More Like This
Pregnant Chrissy Teigen Cracked A Joke About Trump As She Shared A New Ultrasound Photo
The Worst Fake Babies In The History Of Movies & TV That Will Always Be Unsettling
What Parents Need To Know About Hulu's Predator Prequel Prey
10 Cozy, Romantic, & Drama-Filled Shows To Watch If You Love 'Virgin River'