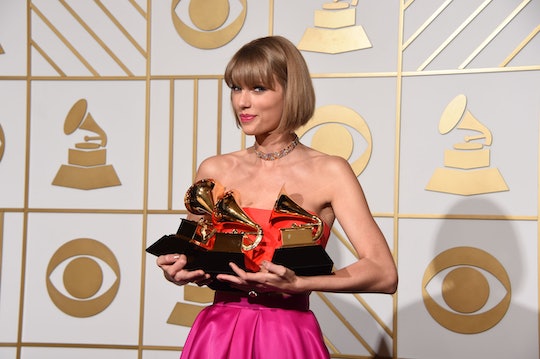 Did Taylor Swift Lie In Her Grammys Speech? Kim Kardashian Claims She Knew About 'Famous'

Taylor Swift was the picture of righteous indignation and rallying feminism during her 2016 Album of the Year Grammys acceptance speech, when she not-so-subtly admonished long-time agitator Kanye West for trying to take credit for her accomplishments. She didn't mention West by name, but it was pretty clear she was referring to the inflammatory lyric on West's new album that did use hers, and was released just before the February event: "I made that b*tch famous." But after West's wife, Kim Kardashian West, publicized a Snapchat video Sunday night of West getting Swift's approval for at least one line about her in the song "Famous," Swift fans and critics alike are suspecting that Taylor Swift lied in her Grammys speech.

The beef between the two dates all the way back to 2009, when West *famously* interrupted the 19-year-old country-pop singer onstage right after she beat out Beyoncé for Best Female Video at the MTV Video Music Awards. Fast forward to 2016, and Swift was publicly outraged when West dropped "Famous," claiming that she knew nothing about the song before it came out. Kardashian, though, soon called Swift out on what she said was a lie, telling GQ Magazine that she had video proof Swift had OK'd the lyric "I feel like me and Taylor might still have sex/Why? I made that b*tch famous."

And the series of short clips she shared via Snapchat Sunday night do show West reciting the "I feel like me and Taylor might still have sex" line to Swift over the phone, and Swift, on speakerphone, approving. "It’s like a compliment, kind of," she says. And a little later: "It’s obviously very tongue in cheek either way. And I really appreciate you telling me about it. That’s really nice."

What the clips don't mention is the "I made that b*tch famous" jab, a clear reference to the 2009 VMAs incident. Soon after the internet went bananas over the revelation, Swift condemned that line of the song in an Instagram post:

Her rebuttal basically begged the celebrity couple to please, please leave her alone. "Where is the video of Kanye telling me he was going to call me 'that b*tch' in his song?" Swift wrote. "It doesn't exist because it never happened. You don't get to control someone's emotional response to being called 'that b*tch' in front of the entire world." The post does, however, acknowledge that the phone call happened, which is more than her spokesman did back in February, according to Variety:

Kanye did not call for approval but to ask Taylor to release his single 'Famous' on her Twitter account. She declined and cautioned him about releasing a song with such a strong misogynistic message. Taylor was never made aware of the actual lyric, 'I made that bitch famous.'

The new revelation that Swift did, in fact, have more than an inkling that she'd make an appearance in "Famous" has convinced some that she's been happily feigning her "victim" status since the song's debut, lying to garner sympathy and, yes, perhaps even make herself a little more famous. When she made the Grammys speech this year, telling fans to focus on their work instead of paying attention to those who "try to undercut your success or take credit for your accomplishments or your fame," she had much more support.

Of course, Swift's obviously-aimed-at-Kanye words resonate a little differently if she was in on it the whole time. Although there's not direct proof that she did know he was going to assert that he made her famous, she does at one point during the phone call seem to absolve him for his 2009 tirade. "You honestly didn’t know who I was before that," she tells him. "It doesn’t matter that I sold 7 million of that album before you did that, which is what happened, you didn’t know who I was before that. It’s fine."

To me, that indicates that somewhere between that jumble of Snapchat videos, Kanye did let Swift know he might drop in a line about his (imagined) hand in building her fame — especially because she tells him to "Go with whatever line you think is better," but we hear him read only one about her. And Kardashian has said the actual phone call was about an hour long. But regardless of what really happened (celebrities! We may never know!), the sentiments Swift conveyed in her Grammys speech of self-reliance and blowing off the haters and hard work are still incredibly valuable.