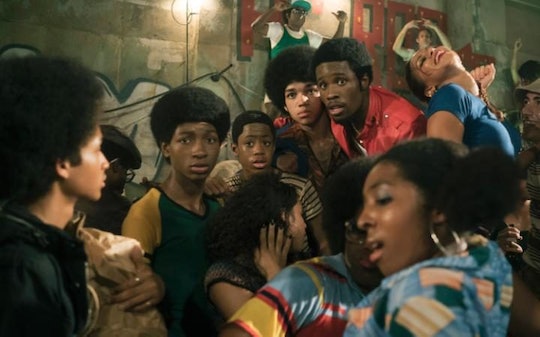 Did The Blackout In 'The Get Down' Really Happen? It's A Significant Event In History

The Get Down is a fictional story from the minds of acclaimed visionary director Baz Luhrmann and Pulitzer Prize-winning playwright Stephen Adly Guirgis, but that doesn't mean it's not rooted in history. In fact, The Hollywood Reporter describes it as "a mythic saga," and "mythic" is a great way to describe it – many of the particularities are invented (as are the principal characters), but the overarching themes and story are true. One major plot point in the first season is the blackout. But was the blackout in The Get Down real or one of the fictionalized aspects?

Not only was the blackout real, but it was actually just as pivotal an event in hip-hop history (and New York history) as The Get Down represented it. The series brilliantly uses the real-life blackout as a pivotal event in the lives of its fictional characters as well.

In the series, the blackout takes place in the last third of Episode 3, the aptly-titled "Darkness is Your Candle," and the effects are felt throughout the subsequent episode ("Forget Safety, Be Notorious") as well. After days of blistering heat and record high temperatures – at one point, Jaden Smith's character Dizzee remarks that he thinks the Bronx might be "getting closer to the sun" – a massive, citywide power outage hits on July 13, 1977, leaving the entirety of New York City without power.

In the show, the blackout is a pivotal moment as well, inadvertently kicking off several major developments. The blackout hits as several characters are doing significant things. Mylene is midway through recording a terrible song with Jackie Moreno, a has-been, drug-addicted record producer brought on by Mylene's uncle, Francisco "Papa Fuerte" Cruz, and when the two are left alone during the outage, she has a chance to get through to Jackie and convince him that she's the real deal. Jackie then promises to write Mylene a brand-new, actually-good song, effectively kicking off her music career.

Just as Ezekiel, Shaolin, and the rest of the "Fantastic Four Plus One" finish disposing of DJ Malibu's car (with the body of the Warlords kid killed by gangster Cadillac in the trunk), the blackout hits. Having struggled with finding the money to buy a new set of DJ equipment (after Shao's was burned to a crisp in Episode 2), Zeke leads his friends to join the looting and they steal the turntables and speakers that they need.

The looting is also based in reality. According to The Telegraph, once the blackout hit as a result of a lightning storm hitting the ConEdison grid, the city experienced a "moment of collective insanity" – many people looted for practical things like food and appliances, but others stole "more specialist equipment," like DJ equipment. Luhrmann liberally uses actual documentary footage and archived news reports to illuminate the blackout.

As Shaolin said at the start of Episode 4, prior to the blackout and looting, there were only five legit DJ crews, but after, many more sprung up. This brings a new level of tension to Zeke and Shaolin's plan to become a big-time DJ crew and make a start in the yet-unnamed hip-hop world.

Of course, beyond those major plot developments for Zeke, Shaolin, and Mylene, there's also a personal development – in the aftermath of the looting, while the city is still blacked-out, an emotional Zeke and Mylene finally have sex on the roof of the Kipling family's apartment building.