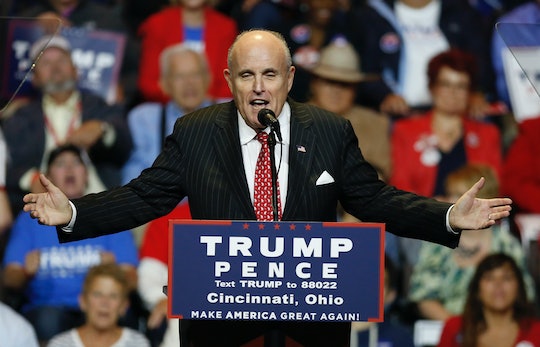 Did The FBI Really Leak Information To Rudy Giuliani & Trump? Maybe Not

Former Mayor of New York City and current advisor to Donald Trump, Rudy Giuliani, is known for being outspoken — especially in this election. Giuliani's recent outspoken moment might just be the worst yet. Giuliani claimed he knew information about the FBI's investigation of Hillary Clinton before it was announced to the public. So did the FBI really leak information to Rudy Giuliani and Donald Trump? Giuliani claimed he knew something Friday morning, but quickly retracted his statement later in the day.

Friday morning, Giuliani made an appearance on Fox & Friends on Fox News to campaign for Donald Trump. Giuliani, as outspoken as he is, said quite a few things about the FBI's discovery of new emails related to Hillary Clinton. The announcement about these new emails, of course, was made by FBI Director James Comey just one week ago, last Friday. But according to Giuliani, he knew about them for quite some time before:

I had expected this three or four weeks ago because way back in July this started, they kept getting stymied looking for subpoenas, looking for records...this has been boiling up in the FBI for some time. I did nothing to get it out, I had no role in it — did I hear about it? You're darn right I heard about it. And I can't even repeat the language that I heard from it.

The FBI Press Office did not return Romper's a request for comment.

But despite Giuliani making this bold claim — that he knew that the FBI was going to say something about new emails related to Clinton's investigation — Giuliani quickly retracted his statements. Later in the afternoon, he went on CNN to do clarify his comments made on Fox News. "That's not correct," Giuliani told Wolf Blitzer. "I have not had conversations with anyone inside the FBI."

He's right — he does claim in his original statement that he had nothing to do with it — however, his claiming of "knowing something" looks just as bad on Giuliani and the Trump campaign. Giuliani then told Blitzer that everything he hears comes from "former FBI agents and it's all hearsay." But why couldn't have Giuliani said this when he was on Fox & Friends in the first place?

Giuliani's outspoken statements made Friday morning on Fox & Friends were a little misleading. But at this point in the election, with only a few days left to go, there is no room for misleading statements or error.