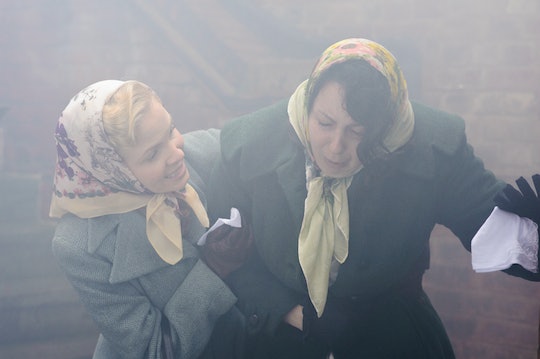 Did The Great Smog On 'The Crown' Really Happen? This Was An Important Piece Of History

If there's one thing 2016 is getting right (and there may really be only this one thing), it's biopic television series. Netflix's latest contribution to the mix is its highly anticipated period drama The Crown, based on the life of Queen Elizabeth II. It weaves several real historical events into its storyline, in addition to exploring the personal difficulties of becoming a female monarch in the middle of the twentieth century. One of the challenges The Crown depicts is the Great Smog, which took place the same year Queen Elizabeth was coronated. So did the Great Smog on The Crown really happen? In fact, it was the worst case of air pollution in the United Kingdom's history.

From December 5 to December 9, 1952, a dense smog covered the city of London, and even filtered into people's homes. At the time, it wasn't considered a cataclysmic environmental event, even though lack of visibility threw the city into a state of chaos. London would often fall under "pea soup fogs," so named for the yellow or green tint the air pollution from burning coal gave the naturally occurring fog. During the Great Smog, a combination of cold weather, fog-creating wind cycles, a lack of wind dispersing the air, and coal burning homes all contributed to the five-day haze.

The cold snap led to Londoners using more coal than usual to heat their homes, and the post-war period meant that their domestic coal was of lower quality than usual. The combination polluted the air more heavily, and the weather accumulated the air pollutants, keeping them trapped over the city. Once there was a shift in the weather pattern, the smog dispersed quickly, but in the meantime, visibility was reduced to just a few yards, making driving impossible and even walking around more difficult — not to mention dangerous.

While some were able to afford smog masks, the relative normalcy of dense air pollution over London meant that there was no intense panic over the very real health threats of inhaling that much smog. At the time, 4000 deaths were attributed to the Great Smog, although more recent research has suggested that the number may be closer to 12,000. It mostly affected the very young and very old, causing serious respiratory infections in those with compromised immune systems. Over 100,000 became ill, but the event's deadliness also triggered improved environmental protections, like the Clean Air Act of 1956. Following its passing, London only suffered one subsequent smog event in 1962.

So while some aspects of The Crown may contain fictional undertones, the overall content of this episode is very much based in facts. It was an important piece of history and a hurdle Queen Elizabeth II was forced to face very early on in her reign.