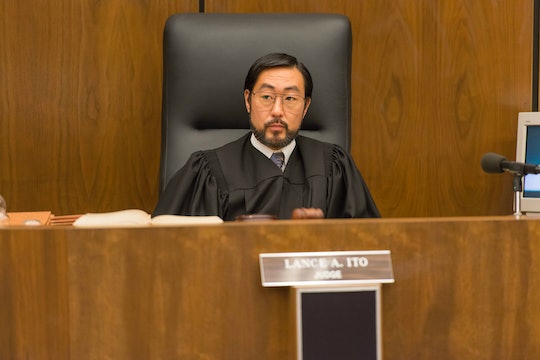 Did The Jury Wear All Black To The O.J. Simpson Trial? 'American Crime Story' Highlights The Juror Revolt

Tuesday's American Crime Story: The People v. O.J. Simpson is tackling the infamous "juror revolt" that took place during the trial in April '95. One of the key moments of the court proceedings was the day that 13 jury members and alternates processed into the courtroom wearing all black, with the remaining members of the jury in conspicuously colorful outfits. So, why did the O.J. Simpson jury wear all black to the trial? The wardrobe statement the jury made was actually a huge moment in the trial, and completely caught the media's attention.

The defiant act was actually in protest of Judge Lance Ito's dismissal of three deputies who were assigned to protect and monitor the jurors during their grueling sequestration. While the jury was extremely diverse, a couple of jurors claimed that three of their deputies were giving white jurors with preferential treatment. The allegations of discrimination, as reported in a Los Angeles Times article, stemmed from a 72-year-old black male alternate who claimed that the deputies monitored the black jurors more closely during their downtime, while the white jurors were allowed to walk around more freely.

While it's possible that these deputies were harboring racial biases themselves, it could also be argued that they were simply doing the job assigned to them, which was to protect the jury.

Nonetheless, to avoid a mistrial, Judge Ito dismissed the deputies in question and reassigned them to other areas of the courthouse. Most of the jury, including mostly jurors of color, claimed no mistreatment by the deputies whatsoever and believed they had been unfairly dismissed. According to the Los Angeles Times, one 50-year-old black female juror told the judge, "As for any discrimination or prejudice, I have not experienced that at all, and trust me, I am the type if I would have felt that way, I would have handled it immediately or I would have confronted somebody."

What prompted Ito to dismiss the guards in the first place was one of the jury members coming to his chambers begging to be dismissed herself, according to CNN. According to the juror, Ito offered to remove three of the deputies that were allegedly giving her "problems," which upset the rest of the jurors.

The fact is, after four months of sequestration, and several more to go, many of the jurors had formed attachments to the deputies assigned to watch over them, and were visibly distressed on the day they learned they were dismissed. According to the Los Angeles Times, several jurors were seen crying upon hearing the news after court on the evening of April 20.

The same Times article says that after hearing that the deputies had been dismissed, the jurors refused to appear for trial until Judge Ito met with them to discuss their concerns. He said he would, but only if they showed up to court. So, on April 21, the jurors processed into the courthouse wearing black in protest of the guard dismissals, and Judge Ito was forced to shut down the trial itself for two days to hear their concerns individually in his chambers.

The combination of psychological stress from a murder trial-turned-media circus, months of sequestration from their families, being forced to spend all their time together with very few leisure activities, and losing three authority figures who were clearly providing a source of comfort to many of them ultimately led the jury to bring the trial to a standstill in an unprecedented juror revolt.

Ito needed to retain as many jury members as he could and keep them as comfortable as possible in order to avoid a mistrial, which would have proved a huge waste of the time and resources that went into trying the case in the first place. Unfortunately, all he succeeded in doing was setting off the powder keg of an already stressed out, on edge, and emotionally exhausted jury.