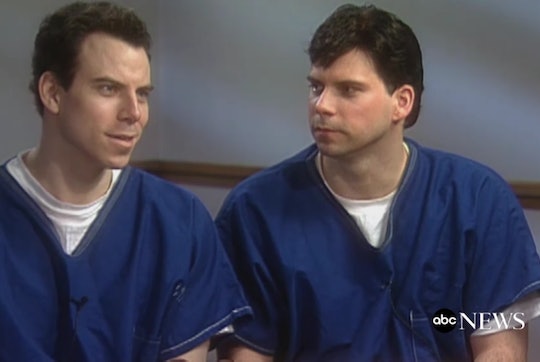 The Menendez Brothers Almost Got Away With Murder

When Lyle Menendez called 9-1-1 on the night of Aug. 20, 1989 to report the murders of his parents while his brother Erik was heard in the background, the immediate reaction from law enforcement was that someone else entirely had done it. Later, the brothers were arrested after almost six months of spending the inheritance they received, but eventually, they were arrested for a much bigger crime: the murder of their mom and dad. So did the Menendez brothers confess to killing their parents?

Erik was the first to confess to the crime during one of his counseling sessions with his psychologist, L. Jerome Oziel, who had, unbeknownst to Erik, recorded many of their meetings together. Oziel testified in court that on Oct. 31 and Nov. 2 of 1989, he had met with the brothers and that Erik was the first to confess to killing their parents and soon after, Lyle admitted it too. According to Oziel's testimony, Erik had initially called him and told him that he needed to talk.

After arriving at the office, Oziel and Erik went for a walk around the block and when they arrived back at the office, Erik reportedly leaned against a parking meter and told him, "We did it. We killed our parents." In addition to evidence like this, new family videos will be revealed in ABC's upcoming documentary, Truth and Lies: The Menendez Brothers – American Sons, American Murderers, on Jan. 5 at 9 p.m. ET, to help give viewers better insight into the family's history.

After Erik's confession to killing their parents, he continued in great detail once they got back to Oziel's office, where he was unknowingly recorded. Oziel then called Lyle, who came to his office and reportedly said that Erik had ruined the perfect crime. Both brothers returned on Nov. 2 for another session with Oziel, wherein they both talked about the murder they had planned for their father. According to Oziel, the Menendez brothers said that their mother wasn't originally a part of the plan, but that they'd decided that killing her was best to avoid any witnesses and that, as Oziel said, they "felt they would be putting their mother out of her misery."

But, even though the Menendez brothers confessed to killing their parents and didn't try to run when they were both arrested almost six months after the crimes were committed, they weren't the immediate suspects when the murders happened. Although neighbors close by reported that they'd heard loud bangs, they hadn't thought much of them since it was Beverly Hills and this was long before the days of O.J. Simpson and crimes of this nature to occur in the area.

The brothers had even purchased movie tickets to serve as their collective alibi for the time frame of the murders of their parents. But as they began to lavishly spend the money that was left to them, along with their father's life insurance — spending somewhere in the realm of $700,000 in less than six months — they attracted a lot of attention and suspicion. But ultimately, it was the confession from the Menendez brothers that got them caught and arrested in the end. And then, in 1996, after a lengthy court process that lasted six years, Erik and Lyle were officially sentenced to life in prison without the possibility of parole, which they are still serving to this day.