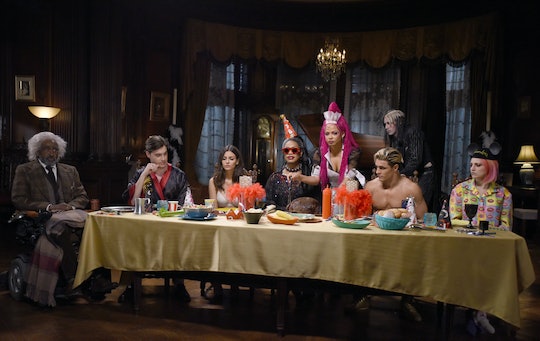 Did They Eat Eddie In 'Rocky Horror'? Frank N. Furter Hated Him

Fans of the cult film Rocky Horror know that some elements of the musical don't make sense, or are plain disturbing. One example is definitely Frank N. Furter's hatred of Eddie, ex-delivery boy and both Frank and Columbia's ex-lover. During Eddie's performance of "Hot Patootie," Frank becomes so jealous that Rocky likes Eddie's singing that she kills him. Afterwards, Frank and the whole gang share an uncomfortable dinner together. One question looms over them as they eat the unidentified meat: are they eating Eddie in Rocky Horror?

As it turns out, the answers differ depending on what version you watch. In the original, it's confirmed that they do. Not only does Frank call Eddie a "tender subject," but his mutilated remains are seen later. This is in-tune with the edge and fringe nature of the original. Frankly (pun-unintended) it would be weirder – certainly less "Rocky Horror"-esque – if they didn't eat Eddie.

FOX's remake, however? At first, it was more ambiguous. Frank repeats the line about Eddie being a "tender subject," and Columbia gets pretty queasy. For a brief time, it seemed that they kept to the original and that Eddie was served for dinner. One moment, however, changed that.

During the dinner, Frank becomes so frustrated with everyone that she rips off the table cloth – to reveal Eddie's body encased in the table. Not only did he seemed "in-tact" (not mutilated like Meatloaf's original Eddie), but he was fully clothed, so it does not seem like Frank did anything to him.

While FOX's Rocky Horror isn't afraid to "go there" in some instances – like the pool scene and "Touch-A, Touch-A, Touch Me" – this is one case where the original and remake did not align. Seeing as this remake aired on network television and was not a low-budget turned classic, there's bound to be differences. This Rocky cast not eating Eddie is not a huge enough change to completely derail the TV version; in fact, some people might prefer it this way. Despite it not holding true to the original, viewers may not want to know Frank and the others as cannibals. Regardless, it's one interesting detail that the FOX production decided to push back against.

More Like This
Exclusive: 'Firebuds' Dives Into Hanukkah Traditions In Festive New Episode
20 Heartwarming Episodes To Help Prepare Your Child For A New Sibling
All The Nights The Grinch Airs On TV In 2022
Disney Introduced Its First Openly Gay Teen Character In Strange World