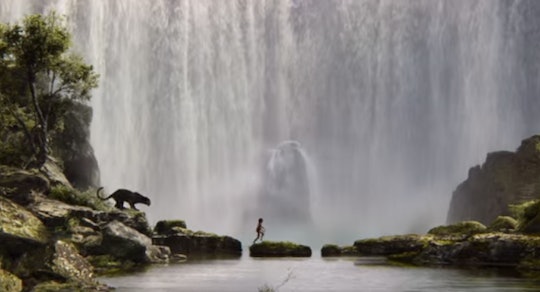 Did They Use Real Animals For 'The Jungle Book'? Shere Khan Looks Frighteningly Lifelike

Disney's newest remake of a classic, The Jungle Book, is opening in American theaters Friday. The movie is not only 3-D, but also a big upgrade on the 1967 version, because computer-generated imagery (CGI) has grown by leaps and bounds since the cartoon Jungle Book was first released. While watching the new film in theaters, at times it can seem like an actual panther is leaping towards the camera, leading some to wonder if The Jungle Book used real animals.

Fortunately, the only animal in the film was its very human star, Neel Sethi, who played Mowgli. Disney used CGI magic to create the walking, talking jungle animals of the film. According to Variety, Disney Studios Chairman Alan Horne wanted The Jungle Book to have a similar feel as Avatar and Life of Pi, recent live-action films that used CGI spectacularly.

"Alan said, 'Let’s really embrace this new technology and see what we can do if we push it to its limit,'" director Jon Favreau told Variety. "I thought, 'If we really set it up, could we do something that took it the level where you were watching something that was either photo-real or pleasantly elegant and beautiful and hypnotic?'"

If Twitter is to be believed, Favreau and the Jungle Book team succeeded. Wildly. (See what I did there?)

The Jungle Book based its CGI-crafted critters on real animals, however, in the same spirit as the original book. Bagheera the black panther is a distinctly-colored leopard, and National Geographic suggested that the character of Baloo is based on a sloth bear (which sounds like the cutest bear possible). The fact that Shere Khan, the Bengal tiger, wants Mowgli dead makes sense when you realize there's only 3,890 Bengal tigers left in the world thanks to human poaching and the development of Bengal tigers' habitat. Mowgli's wolf parents are Indian wolves, Kaa is an Indian rock python, and King Louie is based on the now extinct, nine-foot-tall Gigantopithecus ape.

The team working on The Jungle Book also played with some anthropomorphic element, giving the animals a dose of humanity (well, beyond the talking and walking, of course). According to Variety, they gave Baloo the same eyebrow raise as Bill Murray. "We tried to do it enough so you would see the soul of the actor, but not so much that it took you out of the reality of the movie," Favreau told Variety.

So no, the animals in The Jungle Book aren't real, which is a good thing for both conservation and the safety of the team on set. But with amazing CGI and some pretty convincing actors behind the animal's voices, I won't blame you if you choose to suspend reality for a bit while watching the film.