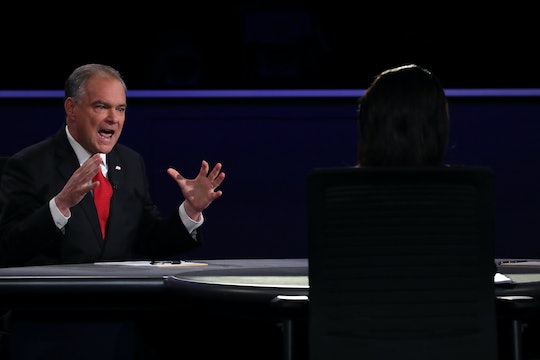 Did Tim Kaine Wink At Elaine Quijano During The Vice Presidential Debate?

On Tuesday night, Sen. Tim Kaine and Gov. Mike Pence squared off at the first and only vice presidential debate of the election cycle. Though the night focused on policy and plans for the future of our country, it wasn't exactly what the candidates said that had people talking. Halfway through the debate, many were distracted by Kaine's gestures toward moderator Elaine Quijano. Though the moment happened quickly, did Tim Kaine wink at Elaine Quijano during the vice presidential debate?

Many were incredibly put-off and disgusted by the gesture. But even more thought the gesture symbolized that Quijano and Kaine were in "cahoots" with one another. Others felt that the moment, though fleeting, solidified Kaine as the replacement antidote to the fact that Winker-In-Chief Vice President Biden will leave office in January at the conclusion of his term.

Regardless of what prompted Kaine to wink at Quijano, the act itself was completely uncalled for. It doesn't matter how innocent it was — it's the fact that in that moment, Kaine embodied everything sexist, elitist, and problematic about politics in America, especially when our political parties are helmed by white men. Even further, the fact that Kaine used his position to wink (however subtly or innocently he did it or meant it) at a woman of color on live television.... well, that just makes it much much worse.

The tweets about the moment highlight the confusion people felt in the moment following the wink, as well as the scattered reactions of people watching:

Though in the grand scheme of things, Kaine winking may not be the moment people walk away from the night talking about, but as a woman watching, it's something that unnerves me to no end. In all of the times in my life when men in power have winked at me, it's always been to solidify the fact that they know they wield more power and control than I do. And though I'm not a woman of color and not sitting in moderator Elaine Quijano's seat right now, it makes my skin crawl to think about the sexism deeply rooted in the gesture.

Regardless of how progressive, liberal, or "normal" he seems, Kaine is still a product of the politics surrounding him. In America, those politics amount to an old boys' club that thrives off of misogyny and sexism. And if that's a pillar of a Kaine vice presidency, than than's a huge, huge problem. However, because the gesture was so hard to gage, it'd be unfair to jump to conclusions about what Kaine did or didn't do or did or didn't mean in doing it. Even so, it's upsetting that a gesture like that would even have a place in a vice presidential debate.