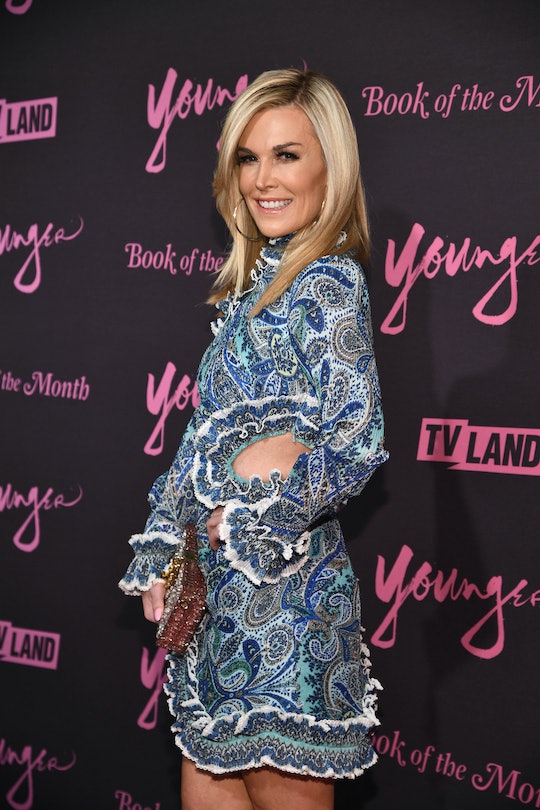 Tinsley Is Embracing The Single Life After 'RHONY'

After repeatedly breaking up and making up and breaking up, ad nauseam, Tinsley Mortimer and boyfriend Scott Kluth finally called it quits this year. She spent much of The Real Housewives of New York Season 11 feeling conflicted and unhappy about the relationship, though she didn't seem wholly ready to let go. How could one's feelings not be reignited by the arrival of a Bambi Shimmer Sneaker? But did Tinsley and Scott get back together, or are they still sticking to their separate cities?

It doesn't look like Tinsley and Scott have found their way back to each other. In June 2019, she briefly spoke to People about how she was handling the split, and it sounded like she was starting to move on. She revealed that she was "fully dating again," though she didn't name names. Instead she said she was dating lots of different people and having fun doing so. "I feel free and like myself again," Tinsley said.

After a season that included sobbing at dinner, sobbing at the Big Apple Circus, and sobbing in her apartment, it's great to hear that Tinsley is finally feeling better. She seems to be enjoying the single life in NYC, and is taking advantage of some new opportunities as well.

Per Bravo, Tinsley launched a capsule collection of lashes with Winky Lux. Her lashes have often been remarked upon on the show, so it makes sense as a collaboration. In Season 9, her tagline was a joke about how good lashes can "fix anything — even a mug shot." And in "More Than a Feelin'," Ramona knew things were serious with Tinsley when she neglected to put on a strip of falsies. They're obviously a big part of her brand, and now fans can emulate the look by checking out the collection. The lashes come in three increasingly opulent styles.

While Tinsley might not be sharing much about her dating life at the moment, her Instagram account did reveal two new, very special someones in her life. While working with the global animal rescue No Dogs Left Behind in China, Tinsley fell for a pair of pups who will now have a permanent home with her in NYC. She adopted two girls whom she's named Strawberry and Shortcake. In her Instagram announcement about the adoption, Tinsley wrote that losing her dog Bambi was horribly painful, but "being able to rescue these little girls from China fills me with such joy." She added, "I can't wait to be their mommy!!!"

Tinsley and Scott may have broken up for good this time. There's no indication on social media or in interviews that Tinsley is considering revisiting the relationship. While anything is possible, it seems like she's embarking on the next phase of her life and embracing some new possibilities. She could be in an entirely different place when RHONY returns for Season 12. She may even find herself in a new relationship, if she decides that's what she wants. But it seems like Tinsley is doing well at the moment, all on her own.