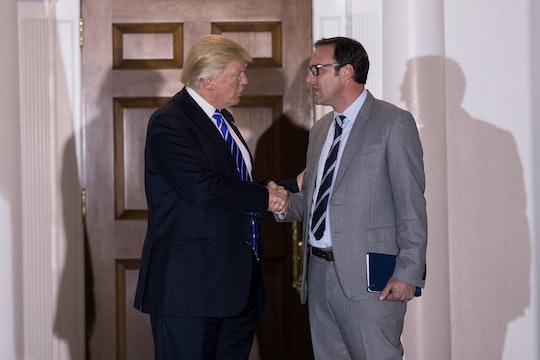 On Tuesday, President-elect Donald Trump and his transition team announced that he had nominated Todd Ricketts as deputy commerce secretary for his forthcoming administration. The nomination is noteworthy for a few reasons, the first being that Ricketts is a co-owner of the Chicago Cubs MLB team, and the second that Ricketts and his family are major Republican donors. A baseball team co-owner is a surprising Cabinet choice even for Trump, leaving some to wonder: Did Todd Ricketts donate to Trump's campaign?

Given the obvious conflicts of interest that could arise from such a donation, it would only make sense that, according to campaign contribution records from the Federal Election Commission, Todd Ricketts did not donate money directly to Trump's presidential campaign, Trump for America. However, Ricketts did make contributions to a number of Republican candidates in Illinois up for election or reelection in 2016, including Sen. Mark Kirk, Rep. Robert Dold, Jr., and House seat race for Joan McCarthy Lasonde. All three of Ricketts' picks lost, including Kirk and Dold, who were each up for reelection. Ricketts was also a major donor to the Illinois Republican party, donating just over $10,000 in 2016.

But as it turns out, Ricketts — and his politically active family — have a fraught history with Donald Trump. And let's not forget about those tricky-dicky super PACs, either.

The Ricketts family have been heavily involved with politics, largely supporting candidates and issues along the right side of the aisle. Ricketts's older brother Pete is the Republican governor of Nebraska. Other older brother Tom is also a registered Republican, as are their parents, Joe and Marlene. Laura — Todd's sister — seems to be the lone family holdout, as Laura Ricketts was a major donor for Hillary Clinton. But in an interesting twist, the Ricketts didn't initially support Trump: Instead, the Ricketts contributed $3 million to an anti-Trump PAC early in the primaries. This wasn't unnoticed by Trump, who even tweeted about the lack of support at the time. Todd's response? "It's a little surreal when Donald Trump threatens your mom," he said at a Cubs press conference after Trump had taken to Twitter.

As is obvious from Todd's FEC contribution records, he and the Ricketts family were solidly behind Wisconsin Gov. Scott Walker during the GOP primaries. But when Walker dropped out of the GOP race in 2015, the Ricketts starting writing checks in support of the clear GOP frontrunner, Donald Trump. The Chicago Tribune reported in September that the Ricketts family pledged $1 million to support Trump. But what about Todd himself? Here's where those tricky-dicky super PACS come into play.

Todd's father Joe, another major donor for the Republican Party, formed the Future45 super PAC, which became a major backer for Trump, including a $10 million anti-Clinton ad buy right before Election Day. All super PACs are required by federal campaign laws to disclose their donors. Todd took a different approach when he formed 45 Committee, a non-profit registered as a 501(c)(4) — and it's that "4" that makes all the difference. Non profits registered as 501(c)(4) are classified as tax exempt "social welfare organizations" — and are not required by law to disclose their donors. Clever boy, Todd — clever boy. As reported by Politico, this allowed Republicans who were embarrassed about publicly supporting Trump the chance to donate in secret.

So while Todd Ricketts himself never donated directly to the Trump campaign, there's no denying he's not a key layman supporter of the Republican Party. Make of Ricketts's Cabinet appointment what you will, but it looks like Ricketts will get to do a lot more than just writing checks and hosting fundraisers for the GOP, now that he's in Trump's inner White House circle.