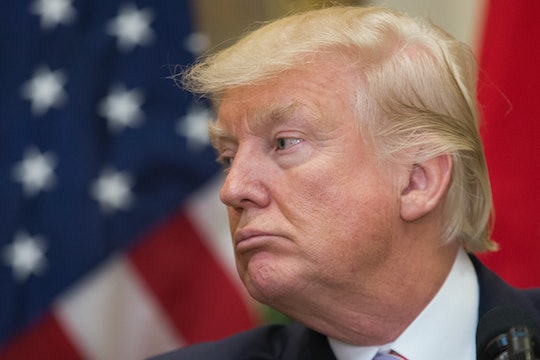 Did Trump Approve The Air Strike In Mosul?

On Thursday, a completed investigation by the Pentagon found that a United States-led bombing in Iraq back in March led to the death of 105 civilians, making it the greatest loss of civilian life since the military campaign against ISIS began in 2014, according to The Independent. Did Trump approve the air strike in Mosul? While the United States military is responsible for the attack — and though Trump himself has publicly vowed to take a more aggressive approach to fighting ISIS than former President Barack Obama did — it's unlikely that he specifically approved the bombing. According to The Washington Post, most military strikes on the ground in Iraq are "approved at a U.S. command center either in Iraq or elsewhere in the Middle East," and are usually given the go-ahead by "a one-star general or a team working under him or her [who] reviews and approves such strikes."

That doesn't mean, though, that Trump won't be expected to answer for the loss of civilian life. According to ABC News, the attack ultimately led to the collapse of a building in which civilians were seeking refuge, with the resulting deaths making up "about a quarter of all civilian deaths associated with U.S. airstrikes" since 2014. What's more though is that the battle to take Mosul — the last major ISIS stronghold — has in general led to increased numbers of civilian casualties, according to The Independent, with some critics claiming that the United States-led coalition has been too aggressive in the densely-populated city.

The Pentagon's official position following the investigation though, appears to be that the loss of civilian life was not only unintentional, but ultimately the fault of ISIS. According to NBC News, the investigation found that while the United States did target the building, it wasn't actually meant to collapse: the bomb was dropped in an effort to target snipers in one area of the building, but it set off a secondary blast of ISIS explosives, which leveled the building. It's possible it may have also been a set-up: according to ABC News, United States officials said ISIS militants have "deliberately [enticed] attacks on buildings where they've staged explosives," and where they know civilians are inside. In fact, U.S. Air Force Brig. Gen. Matthew Isler said following the investigation that ISIS has made attempts to recreate similar attacks since the March 17 blast.

According to ABC News, the investigation also looked into the coalition's surveillance of the building, and found that while the area had been watched "for weeks" ahead of the bombing, cloudy weather and blind spots in visual surveillance meant that while the Iraqi military knew that civilians had left the building leading up to the attack, they could have missed seeing people enter — or seeing ISIS militants plant additional explosives.

At the end of March, Lt. Gen. Steve Townsend spoke about the air strike, which then had a rumored civilian death toll of between 100 and 200 people, according to NBC News. He admitted that he thought there was "at least a fair chance" that the United States forces could have been responsible for the civilian deaths in Mosul, but added, "if the U.S. did this, it was an unintentional accident of war."

According to The New York Times, the United States military recently confirmed that American-led airstrikes had claimed "at least 352" civilian lives in Iraq and Syria since 2014. But not everyone agrees with that number: Airwars, a non-profit group that tracks reports of civilian deaths in the two countries claimed as many as 3,100 civilians were killed by American-led attacks during the same time period.

Trump hasn't yet publicly commented on the details of Pentagon's investigation, but in Oct. 2016, Trump spoke out against the military's attempt to take back the Iraqi city from ISIS, tweeting that the United States looked "so dumb" for "[giving ISIS] months of notice," ahead of the attack on Mosul. He also told reporters that he could teach military leaders "a couple of things" about "the element of surprise," according to Business Insider. Critics hit back, arguing that he failed to understand the importance of protecting civilian lives — something a "surprise attack" would make even more difficult.

There's no question that the situation in Mosul is a difficult one, and that there is no easy answer when it comes to fighting ISIS. But the loss of 105 innocent civilians — or any for that matter — is heartbreaking, no matter what the circumstances may have been.