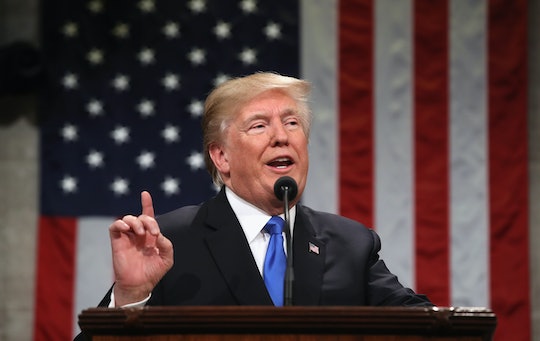 It's no secret that President Donald Trump thrives on competition, especially when it comes to his predecessors. So, it's not too surprising that Trump's State of the Union address on Tuesday night was exceptionally long when compared to past presidents' messages. But did Trump beat Bill Clinton's record for the longest State of the Union?That's the million dollar question of the evening and naturally, Twitter sleuths are on the case.

To be totally honest here, I thought Trump's speech wouldn't last all that long. For starters, Trump reportedly has a short attention span and he's not really into performing presidential duties, at least that's what I've gathered from his more than 90 trips to the golf course during his presidency thus far.

But, I didn't take into account one huge component of Trump's personality, which is that he loves to win. In fact, Trump loves to win *so* much that he hasn't stopped talking about defeating Hillary Clinton in the general election. Trump is also the same guy who told Americans during the 2016 campaign, "We're going to win so much, you're going to be so sick and tired of winning," according to The Atlantic.

And when you consider how much Trump is obsessed with winning for the sole purpose of "winning," it's not too far off to theorize that he intentionally planned his address to be longer than President Bill Clinton's speech on Jan. 27, 2000, which lasted a total of 89 minutes, according to Politico. What better way to stick it to Hillary one more time than by beating Clinton's long-held record? At least that's how I think an angsty and insecure pre-teen would think, and to be fair, Trump fits that bill more often than not.

As for what Twitter thinks about this one, most people are in agreement that Trump was purposely aiming to have the longest speech of all time:

So, did Trump actually beat Clinton's long-held record? The answer is ... no. Trump's speech lasted a total of 80 minutes, according to NBC News, which means Clinton still reigns supreme when it comes to State of the Union address length (not that it really matters, of course). And since Trump clocked in at 80 minutes, he has the third-longest address on record. As for who holds second place, that would be Clinton once again. In 1995, Clinton's speech lasted 85 minutes, according to the American Presidency Project.

And it has to be said that Trump's speech included a lot of clapping. In fact, at one point I thought my head would explode from all the clapping. I think it's a safe bet that at least 30 minutes of the speech was dedicated to applause and lengthy pauses from Trump. Trump is totally that student who thinks he can pad his paper with larger font-size and 2.1 spacing. America sees you, Trump.

Of course, there's no way of telling that Trump intended to beat Clinton's record until some disenchanted staffer in the White House inevitably leaks the story. Or I wouldn't be surprised if on Wednesday White House press secretary Sarah Huckabee Sanders declares, "Trump had the longest State of the Union address — period."

But I think the most important part of this theory is how embarrassing it is if it's *actually* true. The president of the United States should be focusing on the content of their speech as opposed to the length of it, right? If Trump did intend to outdo Clinton solely for the sake of beating him, it shows a level of immaturity that's concerning and somewhat troubling. It becomes more clear each day that Trump sees the presidency as nothing more than a game, which is truly unfortunate.