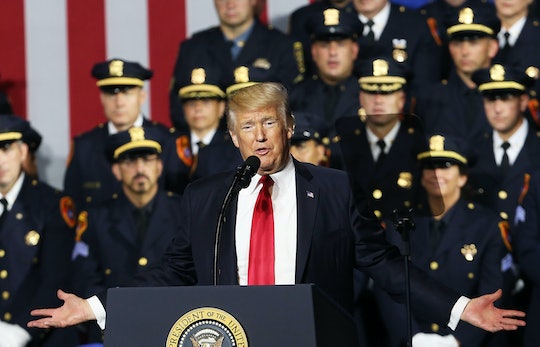 On Friday, in a rather startling speech to law enforcement officials in Long Island, New York, President Trump encouraged both police and immigration officers to not to be "too nice" with members of the public. "When you see these thugs being thrown into the back of a paddy wagon, you just see them thrown in, rough," Trump said at the event, according to CNN. "I said, 'Please don't be too nice.'" For those who have followed headlines about police-involved violence in the news for the last few years, the statement seems mind-boggling — but did Trump actually encourage police brutality during his speech, or was there more to the story in this case?

Romper reached out to the White House for comment, but did not hear back immediately. However, if you watch video footage of the speech, it's hard to argue that Trump was doing anything other than praising "rough" officers and encouraging police brutality against members of the public. During his speech, Trump also said, according to HuffPost:

The comment received applause and whistles from the crowd of law enforcement officials.

Trump also told the gathered officers that he wanted to give law enforcement more power, blaming "weak policing" for existing gang violence. According to Vox, he said:

The laws are so horrendously stacked against us, because for years and years, they've been made to protect the criminal. Totally made to protect the criminal. Not the officers. You do something wrong, you're in more jeopardy than they are. These laws are stacked against you. We're changing those laws. But in the meantime, we need judges for the simplest thing, things that you should be able to do without a judge, but we have to have those judges quickly.

The thing is, laws protect "criminals" because people are innocent until proven guilty. State-sanctioned violence against anyone — even if they're proven guilty — violates basic human rights. And the reason we have judges and courts is because a state's police or military force should never have unchecked power over its citizens. That never ends well.

Trump may have been joking during portions of his speech on Friday. However, for anyone whose life has been affected by police brutality, the words were probably far from a laughing matter.