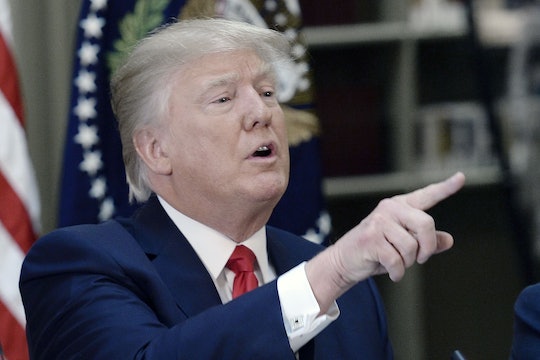 Did Congress Approve The Afghanistan Bomb?

On Thursday, the United States dropped a 22,000-pound bomb on an ISIS complex in Afghanistan, according to ABC News. The question is, did Trump get Congressional approval to bomb Afghanistan, or did he act on his own, as he did less than one week ago when he authorized a missile attack on a Syrian air base? U.S. military officials told CNN that the bomb was dropped at 7 p.m. local time, or 10:30 a.m. Eastern Time. The GBU-43/B Massive Ordnance Air Blast Bomb, also nicknamed the "mother of all bombs" or MOAB, is America's most powerful non-nuclear weapon. It's currently unknown whether the President ran it by Congress first, but technically, he didn't need to.

The 2001 Authorization for Use of Military Force, hastily passed after the Sept. 11 attacks, states "That the President is authorized to use all necessary and appropriate force against those nations, organizations, or persons he determines planned, authorized, committed, or aided the terrorist attacks that occurred on September 11, 2001, or harbored such organizations or persons, in order to prevent any future acts of international terrorism against the United States by such nations, organizations or persons." It was originally meant to combat al-Qaida and the Taliban, but the Obama administration argued that it also applied to "their associated forces," such as ISIS, according to NPR.

The MOAB was developed in 2003, and available to both the George W. Bush and Obama administrations, but this is the first time it's been used. The target was a cave and tunnel complex in the Achin District, part of Nangarhar Province, which borders Pakistan. The massive, GPS guided bomb was reportedly rolled out of the cargo hold of an MC-130 aircraft. According to an official military statement, "U.S. Forces took every precaution to avoid civilian casualties with this strike." The extent of the damage has not yet been assessed.

It's still unknown whether Trump had any involvement with the bomb; when questioned about the lead-up to the MOAB bombing, White House Press Secretary Sean Spicer said, "I think General Nicholson at United States Forces Afghanistan is best to address the tick tock on the situation over there." When pressed, he again referred a reporter to the Department of Defense. After Spicer abruptly ended the conference and stepped away from the lectern, one reporter called out, "Did the President not know about the MOAB strike?" Another can be heard asking whether Trump authorized the strike. Compared to the detailed explanation of the Syrian missile strike (we even heard what Trump was eating at the time), it's rather curious.