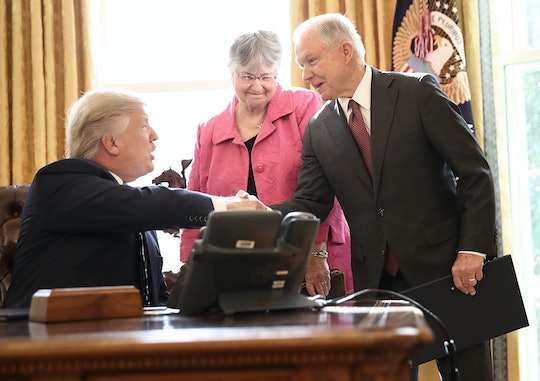 Recusing himself from the investigation on Russian involvement in the 2016 presidential election, Attorney General Jeff Sessions' take on the situation has shifted a bit over time. Now, many are wondering how deep this connection goes and who was involved — namely, did President Donald Trump know about Jeff Sessions' meetings with the Russian ambassador? Romper has reached out to the Trump administration for comment but did not immediately receive a response.

When asked "have you been in contact with anyone connected to any part of the Russian government about the 2016 election, either before or after election day," in a questionnaire on Jan. 10, Sessions responded with a simple "no." At a news conference called by Sessions on Thursday, however, Sessions admitted that he had spoken with Russian Ambassador Sergey Kislyak on two accounts, one of which occurred at Sessions' Senate office two months prior to the election. When asked if Sessions and Kislyak discussed Trump's campaign, Sessions responded with a flippant "most of these ambassadors are pretty gossipy." And when pressed on whether meetings of this nature took place with other Russian officials, he was unable to answer definitively, stating: "I meet a lot of people."

This has many wondering whether Trump was aware of these meetings, and furthermore, if he knew that Sessions had failed to share the existence of the meetings in his Senate hearing. For now, though, Trump is standing firmly by Sessions. Trump told reporters on Thursday that, while he had "total" confidence in Sessions, he "wasn't aware at all" of Sessions' multiple meetings with the Russian ambassador.

When asked if, by Trump's estimations, Sessions told the truth during his Senate confirmation hearing in January, Trump offered: "I think he probably did." As for whether or not Sessions should recuse himself from the FBI investigation looking into Russian meddling in the U.S. election (which, since Trump's comments, Sessions has opted to do), "I don't think so" was the supplied response.

Releasing a statement supporting Sessions on Thursday night, Trump insisted: "He could have stated his response more accurately, but it was clearly not intentional," blaming "the Democrats" for a "total witch hunt." It appears that this situation might only get messier, as upset Democrats insist that Sessions lied to Congress, calling for his resignation as attorney general. Trump hasn't commented on the matter via Twitter (yet), but has instead used the @POTUS account to tweet congratulations to his new Secretary of Energy Rick Perry and his Secretary of Housing and Urban Development Ben Carson.