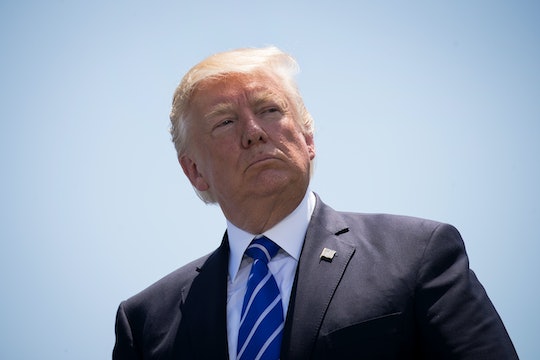 Who ever thought that Senate testimony would be the most exciting television event of the year? Americans remain riveted to their screens as former FBI Director tries to answer the question on everyone's lips: did Trump obstruct justice? And if so, what does that mean for the presidency? Unfortunately, it's a tricky thing to define, and even trickier to prove. Cases have been made for both sides of the argument, and it's one that's sure to last for quite some time. A representative for Trump did not immediately respond to Romper's request for comment.

Jeffrey Toobin, senior legal analyst for CNN, insisted on Wednesday that the alleged conversations between Trump and Comey regarding former National Security Adviser Michael Flynn would absolutely constitute a crime: "He's under criminal investigation, and the President brings in the FBI director and says, please stop your investigation. If that isn't obstruction of justice, I don't know what is." Also troubling is Trump's alleged request for Comey to "lift the cloud" of the Russia investigation, and the eventual firing of Comey. The White House has offered varying narratives regarding Comey's firing, first claiming it was Attorney General Jeff Sessions' and Deputy Attorney General Rod Rosenstein's idea, before Trump told NBC's Lester Holt that he had always planned to fire Comey.

The motive for Comey's firing has also shifted; Rosenstein's official memo to Sessions, dated May 9, said that he recommended Comey be fired because he closed the investigation of Trump's rival, former Secretary of State Hillary Clinton. The next day, while seated next to President Nixon's former Secretary of State and National Security Advisor, having just completed a closed-door meeting with Russian diplomats, Trump said Comey was fired "because he wasn't doing a good job," according to CNBC. But when Trump spoke to Holt the following day, he told him, "when I decided to just do it, I said to myself, I said, 'You know, this Russia thing with Trump and Russia is a made up story.'"

But even if Comey's testimony does prove obstruction of justice, Columbia University law professor John Coffee told CNBC that an indictment is unlikely. "It's generally believed that you cannot indict a sitting president because that would paralyze the government," he said, and furthermore, "Any U.S. Attorney who brings an indictment can be overruled by the Attorney General — even if the case is meritorious." That would be Sessions, who's currently the subject of multiple investigations regarding his involvement with Russia, according to CNN. And he's also implicated in Comey's statement, in which the former FBI Director alleged that the Attorney General was complicit in the president's "inappropriate" behavior. The next logical step, if Trump is guilty, would be impeachment, but his party currently controls Congress, so that's not likely. However, that could all change after 2018's midterm elections. The question is, can we wait that long?