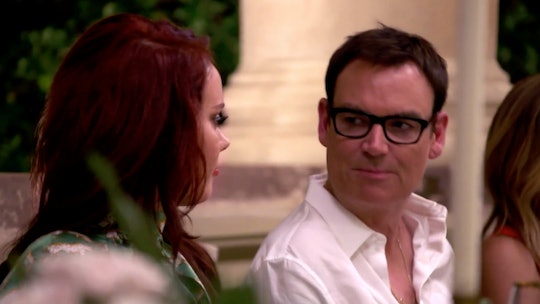 Whitney & Kathryn Have A Complicated Relationship History On 'Southern Charm'

The Southern Charm Season 6 premiere kicked off with a combination interrogation-dinner party hosted by Patricia, where her son Whitney was grilled on whether he and Kathryn had slept together that summer. As everyone feasted on paella at an extremely well-appointed dinner table, Chelsea peppered Whitney with questions about him and Kathryn, which left him rather tongue-tied and self-admittedly "uncomfortable." So viewers who are late to Southern Charm (or just can't retain Bravolebrity facts for more than two seasons) may be wondering: did Whitney and Kathryn date? Buckle up, friends. It's a long and dramatic story.

The pair has history dating back to the beginning of the series. Before she got together with castmate Thomas Ravenel, Kathryn and Whitney at the very least hooked up. Both of them agree on that. But, at the time, they reported very different levels of emotional investment. According to Whitney, it was a one-night stand. He even called it a "moment of weakness" on the show, which like, dude. Even if it was casual sex, it's probably not very southern gentlemanly to speak about your sexual partners with whom you are still friends in the language of regret. Making the whole thing stickier is that Kathryn sees their hookup very differently.

"It was more than what was talked about," she clarified in a 2016 appearance on Watch What Happens Live. "As in, it wasn't like a one-night mistake, like he said."

"We were, like, basically together, dating, whatever you want to call it, for about a week-and-a-half, two weeks," she continued. "But I was staying with him. I was eating breakfast with Patricia."

In my professional opinion, I think what probably happened was more than a one-night stand, but less than a full-fledged relationship. It sounds like the pair had a fling, which Whitney was able to compartmentalize and distill down to a single experience, while Kathryn considered it to be a sustained, albeit short, relationship.

When Kathryn gave the WWHL interview, Patricia was quick to tweet Andy Cohen insisting that she had never breakfasted with the Southern Charm star. OK, so maybe they didn't actually have breakfast, but I think what Kathryn was trying to communicate was that she and Whitney had actually cultivated some intimacy over their short period of time together. By Season 6, she and Patricia made up.

The question of whether Whitney and Kathryn had hooked up again came up in a joint interview she and Patricia gave Entertainment Tonight, and, surprisingly, Patricia jumped in to answer.

"This is what Whitney told me, he said, 'I love Kathryn, we’re good friends, but a southern gentleman would never discuss what he does with a lady,'" Patricia said. "You’re talking about consenting adults. So, who cares? My question is, who cares?"

ET reported that Kathryn was dating America's Got Talent star Hunter Price in January, and as of May, the pair were still together. Of course, this happened after the dinner party scene in question, which filmed sometime last fall. So, for now, the will-they-or-won't-they brewing between Kathryn and Whitney seems to be over.