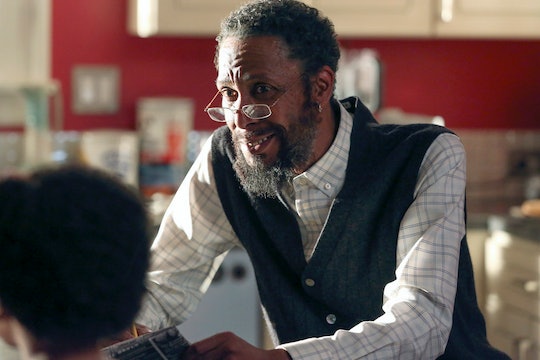 Did William Die On 'This Is Us'? His Time On The Show May Be Coming To An End

Tuesday's episode of This Is Us called "The Game Plan" packed one hell of a gut punch. Not only did it confirm that Jack is dead in the present day (his ashes live in an urn on Kate's mantel), but it also revealed that Randall's biological father, William, is probably not long for this world either. So did William die on This is Us? He's alive at the moment, but presumably will be gone in the very near-future.

In all the hubbub following the revelation of Jack's present-day demise — which explains why Randall's children are calling Miguel "grandpa" — the fact of Randall weeping over William's clothing may have gone somewhat unnoticed initially, but it is very, very telling. Having lost the father who raised him, Randall sort of adopted William, the biological father he never knew, into his family. He brought him into his home with his children, clothed him, fed him, and generally got to know him. And while we may not know the character as well as we've come to know Jack, at least from a fatherly aspect, it is still heartbreaking to know that Randall has lost or will lose yet another father in his life.

The final few moments of the episode showed Randall packing up William's clothes and cradling his hat, pretty much signifying that the cancer took a turn for the worse.

According to an interview with Entertainment Weekly, show creator Dan Fogelman stated that the timing of William's death is intentionally vague. He "The William part of it is meant to be this almost metaphysical glimpse at a hypothetical future," Fogelman explained. "Ron Cephas Jones, the actor, is very much alive in Episode 6, for instance, in present day. But we have this ominous thing looming in some kind of distant or near-distant future." In an episode seemingly all about the afterlife and the different modes that grief can take, it is perhaps appropriate that this glimpse of Randall mourning William should take place now, but it is no less upsetting.

It makes sense that the death shown wouldn't be in a necessarily linear narrative format. After all, This Is Us has played such a trick on viewers before, in the pilot episode. Much like Kevin's Jackson Pollack-esque painting, life as it is portrayed in This Is Us is more of a jumbled, mixed up splatter of emotions and stories and histories, rather than a linear narrative.

So we will probably be seeing more of William in future episodes, though his death is clearly coming. But, of course, we kind of already knew that.