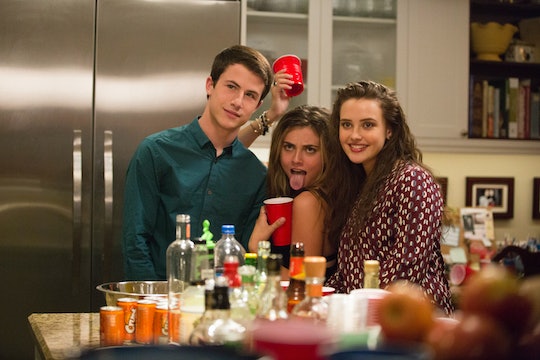 Netflix’s '13 Reasons Why' Expands From The Book

These days, books — especially young adult novels — are always being adapted. Whether it's into a film, a TV series, or sometimes even a musical, you can bet if your favorite novel is a bestseller, it's eventually getting an adaptation. Jay Asher's bestselling novel 13 Reasons Why was no different. Thus far, the show, which was executively produced by Selena Gomez and her mother Mandy Teefy, has received positive reviews. But while the show sticks pretty close to the source material, there are still some differences between Netflix's 13 Reasons Why and the book that may end up surprising you.

The main plot of the story pretty much stays the same. Clay Jensen (played by Dylan Minnette) receives a shoe box of cassette tapes that were made by his former classmate Hannah Baker (played by Katherine Langford) who recently committed suicide. On the tapes are Hannah's 13 reasons for ending her life and each person that is mentioned on the tapes has to listen to all of them and then pass them on to the next person on the tapes in chronological order. If any of the people fail to pass them on, another person has a copy of the tapes and will release them to the world. However, from there, the show took a few creative liberties. Warning: spoilers for the series and book ahead!

In the show Hannah's parents are suing the school for their daughter's death. They believe the school knew she was being bullied and no one stepped in. This is a totally new storyline that didn't exist in the book.

In the novel, Clay's mom does appear and Hannah's parents do come up but you don't really see them in the novel. Not only do you get to really know Hannah and Clay's parents on the show, but you meet most of the other characters' families as well.

The Characters Are More Developed

The novel mainly focused on Clay and Hannah. Other than when Clay runs into Tony and Marcus, you don't see his other classmates except for when they appear in Hannah's flashbacks. On the show, you learn way more about the characters in the present day. Tony's gay, Justin's home life is terrible, Zach's mom thinks he's perfect, etc. Also, Jenny's name was changed to Sheri in the show for some reason.

When the show's first season concluded, viewers discovered that Alex had shot himself in the head and was in critical condition. This is totally new storyline that didn't exist in the book.

Similarly, the finale seemed to hint that Tyler was planning to shoot some of the other people that were on the tapes for the way they treated him. This is also a storyline that didn't exist in the novel. To add to that point, Clay is on Tyler's list most likely because he sent around a picture of Tyler naked, which also didn't happen in the novel.

Despite these differences, the show still got the book's message across, which is the most important part, though, it is interesting to see how much the series has expanded this fictional world.