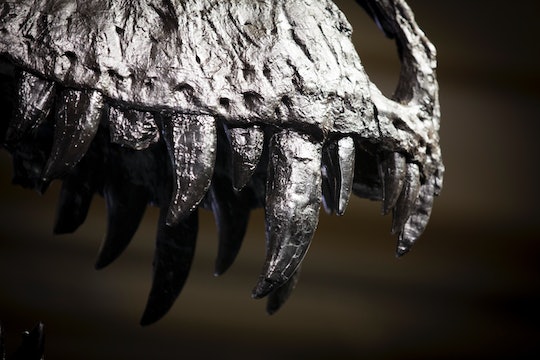 Dinosaurs Might Have Had Lips & All Your Childhood Dreams Are Crushed

Science really knows how to keep things weird. It turns out that dinosaurs might have had lips that covered their teeth and there's something so disturbing about that image I don't even know where to begin. Also, it kind of ruins every dinosaur picture you ever colored as a kid. Now they tell us.

Robert Reisz, a University of Toronto vertebrate paleontologist, presented research on Friday at the Canadian Society of Vertebrate Paleontology's yearly meeting (that sounds like a party, huh?) that shows that the Tyrannosaurus rex, at the very least, could pucker up. It makes them a lot less scary (except that they probably still would have eaten you in one bite). Reisz said in an official statement that he felt like Jurassic Park had it all wrong and so studied other, similar animals like alligators and lizards to check out their lip situation.

Here's the thing: Lips protect teeth by keeping them hydrated. So reptiles that live in water, like a crocodile, don't need lips because the water basically does it for them. But "monitor lizards" or predators that live on land need a little coverage. Hence, it's very possible that T-rex had soft tissue over his teeth. There's no way, says Reisz and his team, that terrestrial dinosaurs had their fangs hanging out all the time. If you think about it, it has to be true.

Reisz makes it seem like we just haven't been paying enough attention all alone. “It’s also important to remember that teeth would have been partially covered by gums," he said. "If we look at where the enamel stops, we can see that a substantial portion of the teeth would be hidden in the gums. The teeth would have appeared much smaller on a living animal," he added.

I don't know why this creeps me out as much as it does. It's better if their teeth are hanging out all over the place, defying science. I prefer the cartoon version. Twitter doesn't seem to agree with me. "Regardless its accuracy, the thought of a dinosaur with lips really makes me chuckle," one user wrote. Others quipped that this must be a marketing ploy by Revlon to sell them lipstick. Har, har.

It's weird AF. Weird like the dinosaur family from the show Dinosaurs that used to air on TGIF in the '90s. Dinos are reptiles, so by definition they're sneaky and weird and slimy and eat bugs. Just picture a T-rex smacking its lips after eating a delicious Triceratops snack. Shudder.

There are some things I wish I didn't know and this is one of them. Let's keep what happens at the annual paleontologist conference at the paleontologist next time.