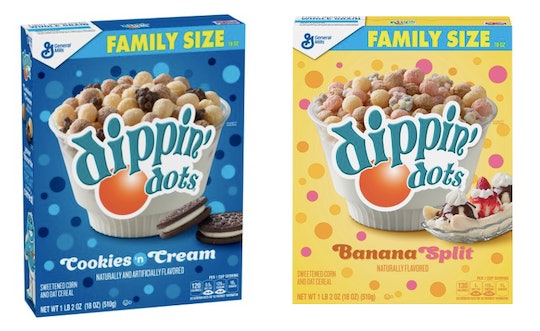 If you grew up in the 1990s or early 2000s, then you're likely more than familiar with a certain mall and amusement park dessert specialty. No, not hot pretzels and not funnel cake. What we're talking about is the one and only Dippin' Dots ice cream. And get ready for a blast from the past, because Dippin' Dots cereal exists now and it's easily every millennial parent's dream come true. And best of all, it's available at the one store nearly every town in America has.

Walmart, y'all. Yes, you read that right. One of your favorite childhood treats is now available in the form of your other favorite childhood treat. And you can go grab a box (or five) for yourself at Walmart right now, according to PopSugar. You can also order it for pick-up online through the retailer. The new cereal from General Mills and Dippin' Dots is only available in two flavors at the moment: Banana Split and Cookies & Cream. So you and your kids can basically now eat ice cream for breakfast. Sort of.

As the website Cerealously.net reported, there are some obvious differences. Because it's a breakfast cereal, it's not frozen and won't melt in your mouth like magical little orbs. But they do have a little bit of magic in them; according to Cerealously.net, the clusters actually have milk in them, so that ice cream flavor is legit.

Indeed, as more than one online food reviewer has uncovered, as PopSugar reported, the new cereal looks, smells, and tastes quite a bit like the real Dippin' Dots ice cream. Of course, it's not actually ice cream, but really, neither is real Dippin' Dots. So just like its original form, the Dippin' Dots cereal is all about the flavor. Oh, and the texture.

Then there's the Cookie's & Cream flavor. Of course, there's already a pretty fantastic cookies-and-cream-flavored cereal known as Oreo-Os, and they're amazing. But, as SnackGator confirmed, the Dippin' Dots version is pretty good, too.

"There are balls of 'cream' and balls of 'chocolate cookie' in here," as SnackGator explained, adding that the "highlight should be the Cookies and Cream Flavored Cluster."

Dippin' Dots cereals clearly have a lot going for them. And for millennial parents who miss the days of getting that plastic cup filled with frozen little edible balls at the mall or movie theater concession stand, this cereal might just do the trick — and give your kids a fun taste of your childhood, too.

Of course, nothing will ever replace actual Dippin' Dots, but ya know, when you're a mom and you have all these little mouths to feed and they don't really want a kale smoothie for breakfast, there's absolutely no shame in reaching for the box of Dippin' Dots cereal and pouring them, and yourself, a bowl (or two).

Cereal is a standard part of the American diet, and when there's cereal modeled after little balls of ice cream, well then it becomes your patriotic duty to go and try it — and definitely let your kids have a taste, too.