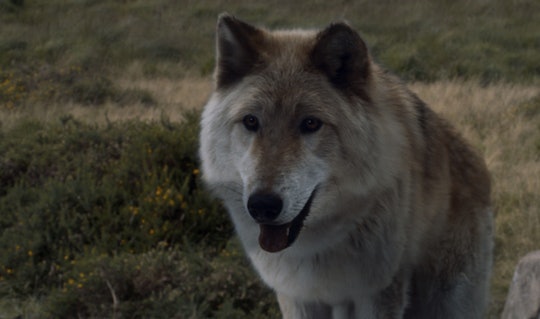 These Direwolf Theories Hint At Another 'GoT' Reunion

The promo for Game of Thrones Season 7 Episode 2, "Stormborn," covered a lot of ground, but there was also a glimpse of something very exciting that called back to the show's very first season. There was a shot of Arya in the woods being growled at by a wolf, and many fans immediately began to hope that it was none other than Nymeria. For those who may have forgotten, Nymeria was the beloved direwolf Arya was forced to send away for her own safety after Joffrey was injured by her in Season 1. Now that there's the possibility of Nymeria resurfacing, fans are coming up with all kinds of Game of Thrones direwolf theories that indicate yet another epic Westeros reunion.

The direwolves have been through almost as much trouble as the Starks themselves. Sansa's wolf Lady was the first to be lost, killed as a proxy when Nymeria disappeared. Robb and Grey Wind were both murdered at the Red Wedding. Then Season 6 upped the death toll when both Bran's wolf Summer and Rickon's wolf Shaggydog met their demise as well. Now only Jon's wolf Ghost is around, because Nymeria hasn't been seen in years. If the wolf in the promo is her, then that could be incredibly exciting news. These theories help ponder all the potential ways this storyline could play out...

Reddit user GMJizzy speculates that the wolf in the promo wasn't actually Nymeria at all, just a regular wolf. But that wolf may have a connection to Nymeria; it could be part of the pack she's created since being let loose, and a way to introduce her back into the show. Think of it like a benign red herring.

When Arya first ran into a group of Lannister soldiers, it seemed possible that she might end up taking them out due to her grudge against the Lannisters. But their personal stories (and tunes) seemed to win her over a bit and she let them live. That might not mean they're entirely safe, though. Reddit user MrSlapYourGrandma wonders if a pack of wolves will kill all the men but leave Arya alive, before it's revealed that Nymeria is their leader.

In the books, more is made of the warging abilities of all the Stark children, not just Bran. Both Jon and Arya have wolf dreams that indicate they are able to warg into Ghost and Nymeria respectively. One sad theory posits that Arya will be killed during one of her revenge attempts and she'll warg into Nymeria at the last minute, living out the rest of her life as the wolf. Talk about a downer.

In a pivot towards the positive, Reddit user Trishlovesdolphins theorizes that after Arya reunites with Nymeria and her new pack, she'll discover that Nymeria has her very own litter. Then all of the living Starks who have lost their wolves will get new ones. It's a little too fairytale an ending for Game of Thrones, but I'm down for anything that ends with puppies.

After so many years of watching the Starks and their wolves suffer, the possibility of a reunion between Arya and Nymeria is almost too good to be true. Here's hoping it comes with a happy ending.