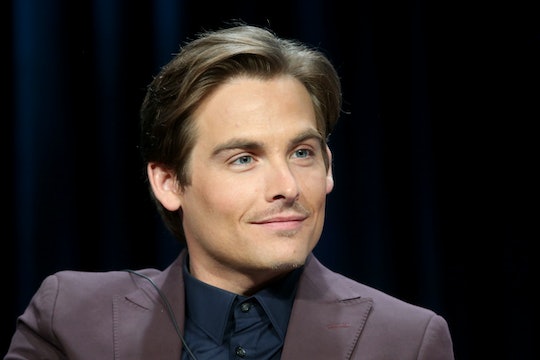 Many parents out there struggle with addiction issues, including Dirty John star Kevin Zegers. Recently, Zegers came under fire because he shared a video of his twin 3-year-old daughters referring to him as an alcoholic. Although this move might seem unorthodox to some, there's an important reason why Kevin Zegers' daughters call him an alcoholic.

For those who aren't already familiar with Zegers' work, he played Toby in Bravo's Dirty John. He also starred in the Air Bud movies and Fear The Walking Dead, among other projects.

As for Zegers' bout with alcoholism? That happened shortly after he moved to Los Angeles from Canada when he was 17 years old.

If Zegers seems very open about his struggle, it's because he is. The dad is so honest, in fact, that he has taught his 3-year-old daughters — Blake and Zoe — to call him an alcoholic.

Zegers shared evidence of this on Wednesday, via an Instagram video of his wife, Jaime Feld, asking his daughters what their dad is. Feld then reminds the girls that Zegers is away an at Alcoholics Anonymous meeting.

Zegers received some backlash for the video, mostly from people who think kids are too young to comprehend the meaning of alcoholism.

Not sure what this is supposed to mean, teach kids what ... that it's okay/funny to be an alcoholic ... I am just confused with this message, I get letting your kids know things when they are young but maybe they are a wee bit too young to understand that this is something not to be positive about, yes, that he's going to meetings, that's good, but as a whole it's not a subject for kids to think is okay.

Someone else asked: "What the f—k is wrong with you guys??"

Another person chimed in: "They are children, they can't fully understand the situation."

Others, however, were inspired by the message.

"Love this," a supporter commented. "In my opinion, it’s better to be honest with kids rather than lie to them and even harder to try and correct that lie later on."

"Awww this reminds me of me when I was little. My daddy has been sober for over 15 years," another person wrote. "I used to go to AA meetings with him since I was 3 years old. My father broke the cycle with him. So I have to give you a high 5 and remember to take it one day at a time."

My father was an alcoholic. I found out when i was 17. He went to rehab and now he has been sober for three years. I’m 25 now. I wish I had known how much he was struggling earlier on in my life. I think I would’ve sympathized with him more and maybe understood his intentions better. I think this is a powerful message and I would never want my dad to be ashamed of what he’s been through and how far he’s come.

Following the heated debate on his Instagram page, Zegers released a message on Thursday addressing the controversy.

“Some people seem to have taken issue with my previous post. Let me clarify. Being in recovery is a part of my life,” he said. “Being an ‘alcoholic’ doesn’t mean that I drink. Quite the contrary. When I’m not home for bedtime, my girls often insist on knowing where I am. Instead of lying to them, or projecting an archaic stigma, we choose to tell them the truth. ‘Daddy’s at a meeting.’”

He continued: “Our hope is that we teach our girls some empathy and understanding about addiction. That in spite of being an alcoholic they have a father who has chosen a healthy way to live. For 8 years, I’ve chosen to live a clean and sober life that involves much more than just not drinking.”

The note concluded: “I choose to share this because too many people, like some commenting below, want to shame people with addiction and mental health issues back into the shadows. My choice is to crack the window open so others can see what’s possible on the other side.”

Of course, Zegers' approach isn't for everyone. But I think many people can agree that it's refreshing to see a celebrity parent address addiction so openly.