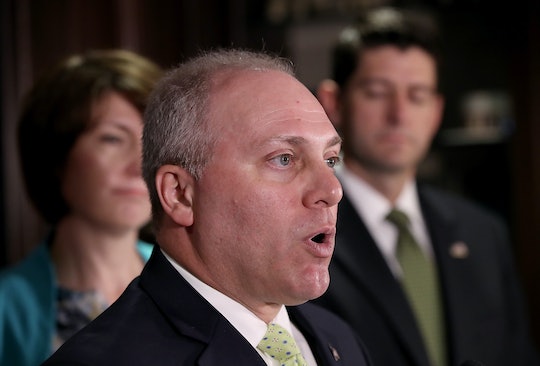 After Wednesday's mass shooting at a Congressional baseball practice sent five people, including the House Majority Whip, to the hospital, people began to speculate on whether the incident would change Steve Scalise's views on gun control. The Louisiana Republican is a member of the Congressional Second Amendment Task Force, and his sponsorship of multiple pro-gun and pro-concealed carry bills has earned him a National Rifle Association A-plus rating. An initial statement from Scalise's office on Wednesday stated he was in "stable condition" and "good spirits" after being shot in the hip, but his injuries were far more severe than originally reported.

Periodic updates from MedStar Washington Hospital Center on behalf of Scalise's family stated that the bullet "traveled across his pelvis, fracturing bones, injuring internal organs, and causing severe bleeding." As of Friday afternoon, he's undergone two surgeries, received several units of blood, and remains in critical condition. More surgeries will be required. According to The New York Times, patients with gunshot injuries similar to Scalise's can require up to 10 surgeries, sometimes spending months in the hospital. After visiting the congressman on Thursday, President Donald Trump acknowledged that "He's in some trouble," according to CNN, adding, "He's going to be OK, we hope."

Could such trauma change Scalise's perspective on gun control? Absolutely. But right now, the father of two lies in a hospital bed in critical condition, the most serious of the American Hospital Association's classifications, which means that his vital signs are "unstable and not within normal limits," and "indicators are unfavorable." If he's even conscious, Scalise's main focus and the focus of his family is his survival — not having an epiphany and convincing his party to reform their stance on gun safety. Questioning his views now is ghoulish, akin to bursting into his hospital room to shout "I told you so!" or using a terror attack as an excuse to criticize a Muslim Mayor or encourage a religiously-motivated travel ban.

I hope Scalise recovers quickly and completely, and that's all I can really say right now. We can't lose sight of the fact that Scalise is a victim, not an accomplice. He supported laws that allowed his attacker to legally purchase the rifle that injured him because he truly believed they were reasonable, a form of protection, and that person's Second Amendment right. He may feel differently now, but that's a conclusion he'll have to come to on his own, not through shaming and victim-blaming. It's time to let him recover in peace and to provide his family support.