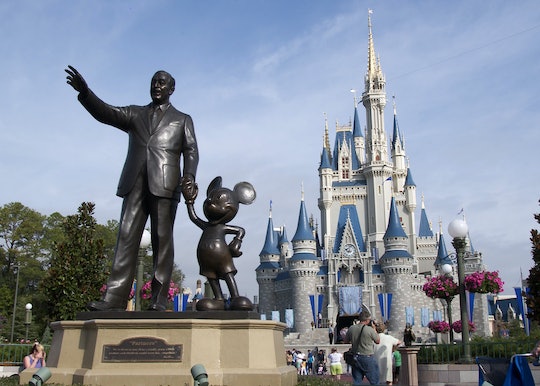 Vegetarians, vegans, and foodies just interested to see what's new will be delighted to know that Disney is adding plant-based meat options to park menus, bringing more variety to Disneyland, Disney World, and Disney Cruise Lines. Park visitors who prefer to not to eat meat will also be able to enjoy a burger and fries, thanks to Disney's newest partnership with Impossible Foods.

Disney announced on Tuesday that it has officially partnered with Impossible Foods, which makes the Impossible Burger, to bring plant-based meat options to the Disney parks located in California, Florida, and on the company's cruise ships. "We’re excited to add more items featuring the Impossible Burger to our menus," John State, culinary director at Disneyland Resort, told CNBC in a statement. "We’re always looking for ways to bring more flavor, innovation and creativity to the Disney dining experience."

The Impossible Burger is currently sold at Tony's Town Square Park in Magic Kingdom Park at Walt Disney World Resort, according to CNN Business, and will be available in Disneyland sometime this spring. But the Impossible Burger won't be the only item available; the product, which is packaged similarly to ground beef, can be made into meatballs, tacos, and chili, and more Impossible products are expected to pop up around the parks and on Disney products sometime in the near future, according to Delish.

Visitors at the 2020 Disney California Adventure Food & Wine Festival, which is held from Feb. 28 to April 21 at Disneyland in Anaheim, California, can get a taste for what's to come. Guests will be able to dine on the Impossible Meatball Submarine, Impossible Cheeseburger Mac & Cheese, and Impossible Lettuce Cups from different booths at the festival. An Impossible Meatball dish will also be available for visitors at the 2020 Epcot Flower and Garden festival, which is held from March 4 to June 1 at Walt Disney World in Orlando, Florida.

While this partnership is certainly a win for vegans, vegetarians, and people who are simply looking to eat less meat, the Disney parks and cruise lines have already been pretty accommodating to plant-based eaters. This past September, in fact, Disneyland and Disney World added hundreds of new plant based dishes to the menus at the parks.

Disney park visitors can simply look for a plant icon on the menus at quick service and table service restaurants to easily know which dishes are made without animal meat, dairy, eggs, or honey. The inclusion of the Impossible Burger is yet just another exciting plant-based option for guests to try.