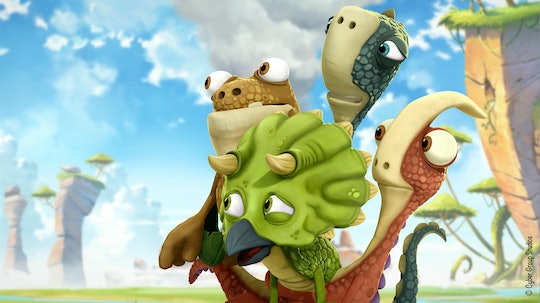 If you're getting sick of "Baby Shark" and want your kid to move onto another animal-inspired tune, look no further than "Wobble Wobble," from Disney Channel's new show Gigantosaurus. The CGI animated show is geared towards preschoolers, and it follows four dinosaurs wobbling their way through prehistoric times. Disney Junior exclusively shared a clip with Romper of the gang singing "Wobble Wobble," and your little one is sure to love it.

According to press materials sent to Romper, Gigantosaurus is based on Jonny Duddle’s children's book of the same title. The show chronicles four dinosaur BFFs — Rocky, Bill, Tiny, and Mazu — who go on adventures to learn about Gigantosaurus, "the biggest, fiercest dinosaur of all." As per the press release, in each episode, the foursome will go on a quest, "as they face their individual fears and work together to solve a problem. As the inquisitive Mazu, playful Tiny, timid Bill, and courageous Rocky aim to learn more about Gigantosaurus, they discover they each have something to learn from him, too!"

In an early look at the show, Rocky, Bill, Tiny, and Mazu find themselves on shaky ground — literally. While messing around in the presence of a volcano, the ground starts to shake.

To keep the group calm and steady, Rocky directs the gang into a conga line, complete with music. As they wobble away from the volcano, they sing, "Wobble wobble wobble! Wobble wobble wobble!" over and over. (Yes, "wobble" is the only word in the song. But hey, it's catchy.) But all of a sudden, the ground in front of them suddenly cracks in half, and Rocky almost falls in.

Luckily, his friends pull him up — but if you (or more likely, your child) wants to know what happens next, you'll have to tune into Gigantosaurus' premiere on Friday, Jan. 18 at 9 a.m. ET on Disney Channel. If your kid is a fan of the DisneyNOW app, the premiere episode will also land on the app the same day.

Not to mention, "Wobble Wobble" isn't the only song your child may walk away from the TV set humming. The show also features an original theme song performed by children's music group The BeatBuds.

TV distribution and development group Cyber Group Studios produced Gigantosaurus for Disney, and its Chairman and CEO, Pierre Sissmann, thinks that young children will learn a lot from the show. “We’re so excited to introduce families to the incredible world of Gigantosaurus,” Sissmann said in a statement for the press release. “Children have always been fascinated by dinosaurs and they will immediately relate to these unique characters, who, like them, are just beginning to assert their independence and learn about the importance of being themselves and being a good friend.”

And if your child winds up falling in love with Disney Junior's Gigantosaurus, there are plenty of other gigantic things you can buy to keep them entertained. For one thing, you can get your little one Jonny Duddle’s board book, which is available for $8.99 on Amazon. Additionally, according to popular Youtube account FamilyGamerTV, toy brand Jakks Pacific is reportedly making action figures of Rocky, Bill, Tiny, Mazu, and Gigantosaurus.

Gigantosaurus will premiere on Friday, Jan. 18 at 9 a.m. ET on Disney Channel and on the DisneyNOW app. Happy wobbling!