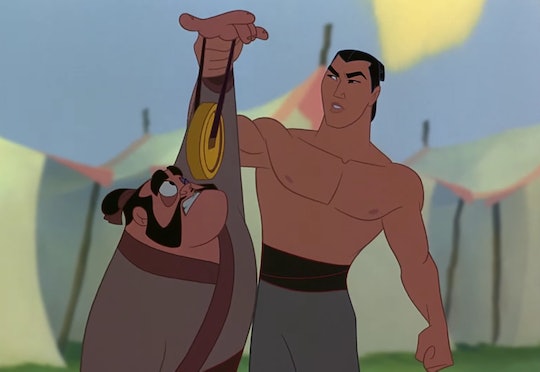 As the release date for Disney's latest live-action remake nears, some fans of the original 1998 animated film were frustrated to learn a key supporting character was given the boot. Disney's decision to cut Li Shang from Mulan, however, was due to concerns that his character was problematic in light of the #MeToo movement.

Fans of the original film, which is loosely based on the Chinese legend of the female warrior Hua Mulan, will likely remember Li Shang as Mulan's commanding officer. Although initially disappointed in the physical capabilities of his male recruits, Li Shang continues to push them in training, vowing to "make a man out" of them in one of the film's most popular musical numbers. Over the course of the film, Li Shang comes to form a close bond with Ping, Mulan's male alter-ego, that some viewers and critics have said was proof of his bisexual nature.

Mulan producer Jason Reed, however, told Collider that the folks behind the upcoming live-action remake felt Li Shan's original character wasn't appropriate for the new film. "I think particularly in the time of the #MeToo movement, having a commanding officer that is also the sexual love interest was very uncomfortable and we didn't think it was appropriate," Reed told Collider.

It's worth noting that nothing flirty or romantic occurs between Mulan and Li Shang in the original animated film until after the war is over and Mulan has returned home, meaning she's no longer under Li Shang's command. In fact, Forbes' Linda Maleh argued that the decision to cut Li Shang's character "conveys a fundamental misunderstanding of #MeToo and of Mulan." She goes on to write:

#MeToo is about the absolutely terrible sexual harassment and assault that women face in the workplace. But, Mulan and Shang’s relationship is built on mutual respect. Shang never, not once, makes unwanted advances towards Mulan, and in fact, it’s Mulan that has the crush on Shang for most of the film, not the other way around. When they finally do decide to start a relationship, they no longer work together, and it is completely consensual. The romance in Mulan is actually one of the healthier examples of a relationship in Disney’s repertoire of films.

Instead of revising Li Shang's role in Mulan's story, Reed told Collider producers had opted to turn the character of Li Shang into two separate people. "We split Li Shang into two characters," he told Collider. "One became Commander Tung [played by Donnie Yen], who serves as her surrogate father and mentor in the course of the movie. The other is Honghui [played by Yoson An], who is [Mulan’s] equal in the squad."