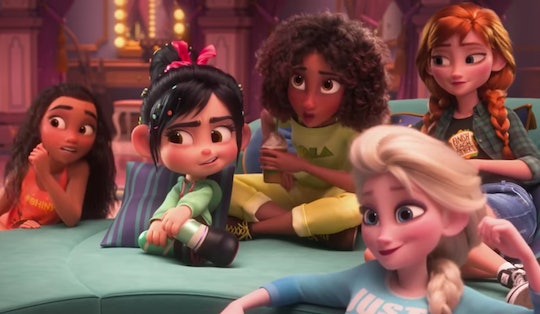 There's good news for fans of Disney's 2012 hit, Wreck-It Ralph: the long-awaited sequel, Ralph Breaks The Internet, is finally set to hit theaters in November. In addition to already boasting a star-studded cast, Ralph Breaks The Internet will also feature a highly-anticipated on-screen Disney Princess reunion (!). But the initial trailers released earlier this summer left fans majorly disappointed, after they realized that Princess Tiana had inexplicably been drawn with lighter skin, and a narrower, Elsa-like nose. The backlash didn't go unnoticed though — thanks to intense social media criticism, and help from the advocacy group, Color of Change, Disney has redrawn Princess Tiana in Wreck-It Ralph 2, according to The Wall Street Journal, in order to address concerns that the studio had whitewashed its first black princess.

Disney fans first noticed that something looked different about Tiana — the lead character from the 2009 animated film, The Princess and the Frog — when the studio released promotional shots from the film in August which showed the full complement of Disney princesses dressed in casual clothes for a slumber party. While the majority of the beloved characters were drawn identical to their original films, Tiana's skin appeared lighter than it had previously, and many felt that her features and hair made her look "racially ambiguous," according to The Mirror.

Though Disney did not immediately return Romper's request for comment on the issue, Color of Change did confirm in a tweet that Disney Animation "has committed to restoring Tiana to her original form to ensure authenticity." And in a statement to USA TODAY, the organization commended the studio's reversal:

Disney’s decision to restore Princess Tiana’s image to that of an unapologetically Black princess with full lips, dark skin and dark hair in Ralph Breaks the Internet: Wreck-It Ralph 2 is a victory for Color Of Change members, Black children and their parents, and Black audiences who want to see the variety of shades, shapes and sizes of Black characters accurately represented in the arts.

While it's obviously encouraging that Disney seems to have properly considered the criticism, it's not surprising that so many people felt disappointed by Tiana's original appearance in the new movie. Given that Disney princesses (and children's characters in general) have long been overwhelmingly white, finally having a black princess has been so meaningful to so many. Yet, not only did this film seemingly make her skin appear lighter, Tiana also seemed to be the only character to have undergone any kind of physical changes at all.

And, of course, the issue only seemed to further highlight the consequence of underrepresentation in general. After all, simply portraying a character of color is only the beginning: studios should also be hiring more people of color to actually work on these films.

That's a lesson that at least seemed to serve Disney's Pixar Animation Studio well when it came to making 2017's Coco: after some early concerns about cultural appropriation, the studio hired an all-Latinx cast for the film, according to Entertainment Weekly, and Coco also became Pixar's first film to feature non-white characters in prominent, non-sidekick, roles, according to Variety. The outcome? A well-received flick that felt like it was a reflection of Mexican culture, instead of just a parody of it.

At the same time, though, Princess Tiana has also more or less been at the center of racial debate since she first debuted in 2009, according to The New York Times, when viewers wondered why her lighter-skinned prince, voiced by a Brazilian actor, couldn't have also been black? And audiences naturally also couldn't help but wonder why it was that Disney's first-ever black princess actually had to spend so much time of her on-screen time not as a beautiful woman, but as a frog.

Still, it's valuable at least to hear that Princess Tiana will appear in the film as the darker-skinned character she always has been, with her original hair and features, just like all of the other characters. And hopefully, this misstep will be an important reminder for both Disney and the film industry at large that representation matters, and it shouldn't be ignored.