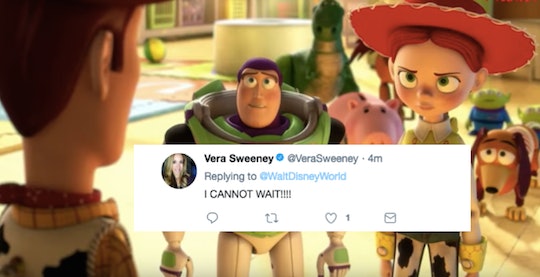 Disney Is Opening A Toy Story Theme Park, & '90s Kids Are Freaking Out

Slogging through the doldrums of winter has caused a lot of people to start daydreaming about their summer plans, and families who are looking into planning a vacation this summer just got another option: Disney World is opening a Toy Story Land this June, so pack your bags and order those FastPasses, because you've got a date with Buzz and Woody. According to the park's site, guests of Disney's Hollywood Studios will get the full living toy experience as they walk through a giant version of Andy's backyard.

The attraction will feature two new rides: Slinky Dog Dash, a roller coaster that mimics the coils of the late Jim Varney's character, and Alien Swirling Saucers, inspired by the prizes from the fictional Chuck E. Cheese analogue, Pizza Planet. Riders will battle aliens as they pilot a rocket ship and try to escape from the dreaded Claw. Thrillist has reported that guests will truly feel like they've shrunken down to the size of a toy themselves as they wander among giant plants, Tinkertoy towers, and statues of beloved characters from the three Toy Story films. There's also a 4D arcade, and Woody's Lunch Box will be serving breakfast, lunch, and dinner.

Toy Story Mania, which has been open since 2008, will be expanded for the new attraction. Guests can ride a tram through a virtual midway as they play five different old fashioned carnival games, all with a unique Toy Story twist.

Mangum said the park prides itself on creating immersive experiences that let fans feel like they're a part of their favorite movies.

One of our favorite stories from opening day is that we overheard a little boy asking his mom, 'Is this where they filmed the Cars movie?' That's exactly how we want people to feel — like they've stepped onto the set of their favorite film … like the quaint town of Radiator Springs or, in the case of Toy Story, the wild and adventurous outdoors of Andy's backyard.

Slinky Dog Dash is a gentle, family-friendly coaster that's fun for guests of all ages. Riders will wind through towers of giant building blocks on a track "built by Andy."

Visitors who are already planning their trip might be curious about the specifics on the menu at Woody's Lunchbox. According to Food & Wine, Shanghai Disneyland might provide a clue; that park's Toy Story Land is already open, and serving Alien Spicy Seafood Pizza, a dish that resembles the aliens from Pizza Palace. Of course, "classic American fare" means the spicy seafood component is probably out, but the pineapple and olives seem non-negotiable.

If you're already scheduling your summer around a visit, be sure to download the park's mobile app, which already features a map of the 11-acre park.

Those on the West Coast won't miss out on all the fun; Disney California Adventure will introduce its Pixar Pier attraction in June, as well. The land will feature four distinct "neighborhoods." The Toy Story area will have its own Toy Story Mania, an Incredibles area will feature a rebranded California Screamin' coaster, and a boardwalk with a Ferris wheel and midway games will celebrate a variety of Pixar characters. An Inside Out area with a family-friendly ride will open at a later date.

If you're hoping to hang with Jessie, Hamm, and the gang in Orlando, grab those tickets fast, because the line's already forming.