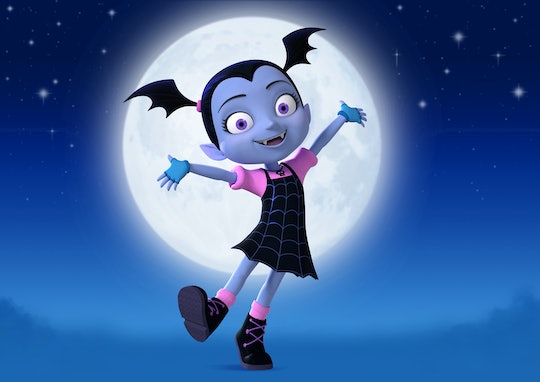 Disney Junior Has *Four* New Episodes Of 'Vampirina' For Halloween

Halloween is still several weeks away, but that doesn't mean your family can't get into the spirit now. As of Oct. 1, Disney Junior launched this year's "HalloVeen" celebration by airing all-new episodes of some of their shows. You can find Disney Jr.'s Halloween line up right here, because your little ones won't want to miss a single episode.

The HalloVeen shenanigans begin on the Disney Channel with new Halloween episodes of Vampirina. Then, both Vampirina and Elena of Avalor will air new episodes all about Día de los Muertos.

The fun continues with episodes of Fancy Nancy, Elena of Avalor, and Rapunzel's Tangled Adventures. But that's not all. There will be several "shorts" airing from Vampirina's Ghoul Girls Rock, all of which will also be available to re-watch on YouTube.

Here is the complete line up of new episodes coming to Disney Junior during their HalloVeen month, so you can pencil them into your schedule (or, more likely, make sure they're DVR'd) and settle in with your family for some fun. Happy trick or treating!

More Like This
Can You Light Fireworks In Your Backyard?
12 Of The Best Hallmark Christmas Movies To Watch In July
20 Family-Friendly Movies To Watch With Your Kids On The 4th Of July
Jenny Han Wanted Both Moms & Teens To Feel Seen In 'The Summer I Turned Pretty'

This article was originally published on Sep. 28, 2018