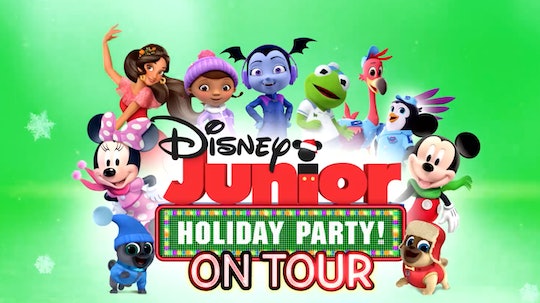 Sure, it may still technically be summer. But judging by the the sheer amount of pumpkin spice lattes, pumpkin-flavored everything, Halloween candy, and Halloween costumes, you'd think we were already ankle-deep in crunchy autumn leaves. (But I mean, can you really blame retailers? We #basicmoms love us some fall goodies and clothing.) With that said, it's definitely way too soon to utter the words "Christmas" or "the holidays." And yet, here we are. Because Disney Junior Holiday Party tour tickets are on sale — and your preschooler is going to freak.

If your kids are obsessed with Disney Junior as mine, then you'll definitely want to check out the Disney Junior Holiday Party tour. The live concert will feature their favorite characters — such as Vampirina, Doc McStuffins, the Puppy Dog Pals, Mickey, Minnie, and more — singing and dancing to holiday and Disney Junior songs, according to PopSugar. (Oh, and Santa will make an appearance, too.) In total, the Disney Junior Holiday Party tour will span over 46 days and travel the country — kicking off on Nov. 1 in Scranton, Pennsylvania, and ending on Dec. 22 in Los Angeles for its final show.

For those who have already enjoyed the Disney Junior Dance Party live show, Red Light Management is again teaming up with Disney for this new holiday rendition, Billboard reported.

“There is an incredible team that is around this production and we are lucky enough to have worked with a really amazing creative team on the Disney Junior Dance Party and they are along for the ride on Disney Jr. Holiday Party,” Red Light Management’s Jonathan Shank told the publication. “It’s a team effort and obviously it is an honor to work alongside Disney in this capacity and to continue to be able to create amazing content and production with their beloved characters.”

You and your Disney-Junior-loving kiddos can scoop up tickets for this festive live concert experience today. Just head on over to the Disney Junior Tour page to find a show near you. Depending on the seat and whether you want the VIP experience, Disney Junior Holiday Party tour can be fairly affordable — or a nice splurge. (The cheapest tickets at the show in Cincinnati, for example are $36.50 apiece. Meanwhile, VIP tickets can set you back $146.50 a pop.)

If you've already purchased tickets — and you're feeling that itch to get your hands on something else festively Disney — I recommend checking out these two new Disney advent calendars. Amazon already sold out of its storybook collection advent calendar, which featured 24 Disney books. So I'd order one of these new calendars ASAP, if it's something you think your children would enjoy.

And hey, while you're at it, might as well get a jump-start on your holiday shopping and consider putting up your Christmas tree. Because now that it's September, 2019 is basically over already — happy new year! Just kidding. Sort of.

But really, from here on out I swear the weeks tend to fly by. Besides, people who decorate for Christmas early are apparently happier. So I'd like to think the same applies to people who start buying Christmas-related items in September. Happy holidays!

More Like This
The Best Halloween Family Pajamas To Match Your Boos
Can Elderberry Help Prevent Illness In Kids? Doctors Weigh In
The Best Bluey Costumes For The Whole Family
Tips For Apple Picking With Kids