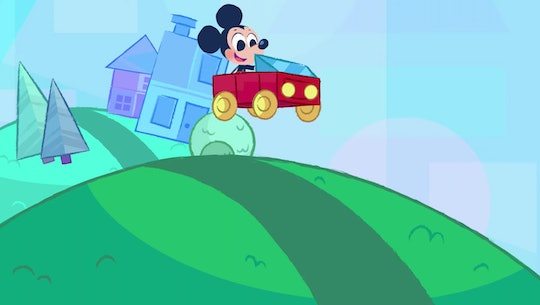 "The new Ready for Preschool Spanish-language shorts will provide more young viewers with the opportunity to follow along with their favorite Disney Junior characters and learn simple, preschool appropriate lessons in subjects like math, language arts, cognitive thinking, and social-emotional development," Lori Mozilo, Disney Junior's executive director for original programming, tells Romper. "Having both the English and Spanish versions available for our audience encourages curiosity, not only about the lessons being presented, but also about different languages and by extension, different cultures."

In "Formas," Mickey Mouse explores how many of the common objects around us — such as cars, trees, houses, and even pizza — are made up of different shapes. But Mickey's adventures aren't just limited to land; in the short, the curious mouse blasts off into space to find new shapes amongst the stars before diving deep underwater to find that marine life also contain familiar shapes.

"Formas" features a song sung by Latin Grammy Award winner Gaby Moreno, whose voice may be familiar to Elena of Avalor fans as she performs the series' theme song.

Since it first aired in October 2019, Disney Junior's Ready for Preschool has become a popular short-form series for young children nearing preschool age. On YouTube, the series has amassed nearly 21.5 million views through the Disney Junior YouTube channel.

With bright colors, upbeat music that's sure to get any kid moving, and fan-favorite Disney Junior characters from popular series like T.O.T.S., Doc McStuffins, Vampirina, Puppy Dog Pals, as well as classic characters like Mickey Mouse and Minnie Mouse, it's easy to see why the Ready for Preschool short-form series resonates with so many young viewers.

Disney Junior's first four Spanish-language Ready for Preschool shorts will debut Tuesday, Sept. 15 on the Disney Junior YouTube account and DisneyNOW, which is the same day Hispanic Heritage Month begins. Fans should keep their eyes out for additional shorts, which are expected to continue to roll out through 2021. And if your child loved the playful tunes featured in Listos Para el Preescolar, they may also like Disney Junior's upcoming Spanish-language digital album, Disney Junior Music: Ready for Preschool Vol. 5, which is expected to be released through Walt Disney Records.