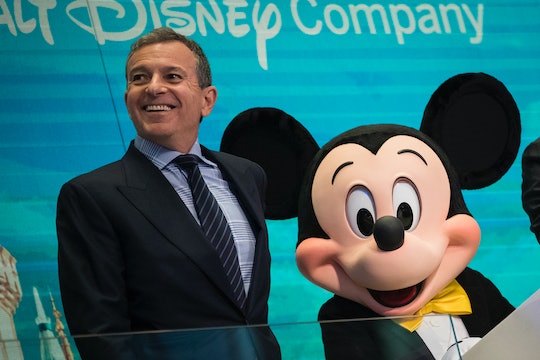 This month has seen a concerning wave of restrictive anti-choice legislation being passed in several states across the country. On May 7, for instance, Georgia Gov. Brian Kemp signed a bill banning abortions if a fetal heartbeat can be detected, according to CNN, which can happen as early as six or seven weeks gestation. Not only does this law create dangerous consequences for people seeking abortion care, it could also impact the state in other ways. In fact, as NPR reported, Disney may stop filming in Georgia if its abortion ban goes into effect.

Speaking with Reuters on Wednesday, Walt Disney Co. Chief Executive Bob Iger said continuing to film Disney's movies and other projects in the state of Georgia would be "very difficult" if the abortion law is put into practice, as it's scheduled to on Jan 1, 2020. Iger told TIME that he "doubt[s]" the media company would stay in Georgia to produce its content, saying, "I think many people who work for us will not want to work there, and we will have to heed their wishes in that regard."

Should Disney follow through on moving production out of Georgia if the state's so-called "heartbeat" law takes effect, it would likely impact a lot of projects, showing just how monumental this dangerous legislation is.

Blockbuster Disney-produced movies like Black Panther and Avengers: Endgame were filmed in Georgia, according to Wired. And right now, according to Atlanta Magazine, several projects beyond Disney are filming in Georgia, such as the Netflix series Ozark and HBO's The Outsider.

Georgia and other states' anti-choice laws are expected to be fought in court. In fact, the American Civil Liberties Union (ACLU) issued a statement in March saying that if Gov. Kemp signed this abortion ban bill into law — which he did on May 7 — they are prepared for a legal battle.

"Georgia has one of the worst maternal death rates in the nation. Black women in Georgia have a maternal death rate of more than three times the unacceptably high rate for white women," Andrea Young, Executive Director of the ACLU of Georgia said in the March 19 statement. "This bill further erodes the health and well-being of Georgia’s women and reveals a callous disregard for their well-established Constitutional rights."

As these lawsuits are still in early stages, Iger said the media company is monitoring developments "very carefully," according to CNN.

Disney isn't the only the media powerhouse considering moving out of Georgia due to its anti-abortion law. According to The Hill, Netflix is actually working with the ACLU in its fight against the state's anti-choice legislation. "We have many women working on productions in Georgia, whose rights, along with millions of others, will be severely restricted by this law," Netflix chief content officer Ted Sarandos told Variety in a statement earlier this week. "It’s why we will work with the ACLU and others to fight it in court."

Additionally, NBCUniversal and WarnerMedia will also consider moving productions out of Georgia, according to the NBC News. "If any of these laws are upheld, it would strongly impact our decision-making on where we produce our content in the future," Comcast Corp's NBCUniversal unit said in a statement on Thursday, as NBC News reported.

Georgia has roughly eight months to reverse its draconian and controversial abortion law before it goes into effect, and though it shouldn't have to come to this, hopefully media companies like Disney threatening to leave the state, which would undoubtedly impact its economy, will steer lawmakers in the right direction.