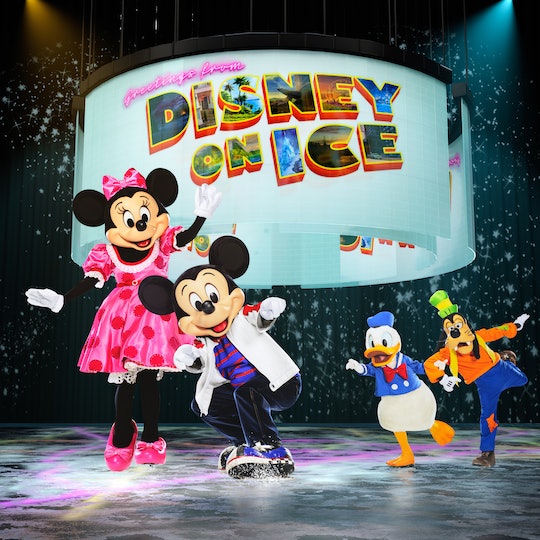 I think we can all agree that kids are pretty enamored with Disney. From the classic movies, to the beloved characters, to the theme parks, there's so much for little ones to love. And, of course, seeing these stories and cute characters in real life is, like, every kid's dream come true, right? Well, thanks to Disney On Ice's new show Road Trip Adventures, Disney fans, both young and old, can enjoy an evening with their favorite characters from Toy Story, Aladdin, The Lion King, and more.

Indeed, Disney On Ice Presents Road Trip Adventures is going to become every kid's newest obsession. The program, which takes place on ice, is the most participatory production from Disney On Ice, ever. The show has a road trip theme (so relevant for summer vacations) and will allow families to participate on that road trip, while everyone's favorite Disney characters put on a theatrical performance on ice skates.

As if that doesn't sound amazing enough, characters from summer movies like Toy Story 4 and The Lion King will make an appearance, in addition to everyone's favorite Disney characters, Mickey and Minnie.

The most incredible part of the show is how immersive it is. Instead of watching Mickey and his friends put on the show, audience members now get to interact with the characters. Throughout the show, there will be in-audience dance moments, road trip karaoke, and carnival games for everyone to be a part of. This is meant for audience members to not only connect with the show, but connect with each other, too.

"No matter how you define your family, Road Trip Adventures encourages everyone to disconnect from their daily lives to reconnect with one another," Patty Vincent, Creative Director for Disney On Ice, said in a press release.

There's plenty of opportunity for families to catch one of these performances. The show is coming to 60 cities along the east coast starting in September and ending in January 2020, with plenty of show times for each stop. To make matters even more exciting, tickets for this show start at $20 a person and tickets for the shows go on sale on May 21. This gives parents plenty of time to plan out their very exciting adventure to see the show.

This summer is going to be the summer of Disney. Disney's live action remake of Aladdin will land in theaters on May 24. On June 21, Toy Story 4 will hit theaters with a brand new adventure featuring some familiar faces (and some new characters). And finally, on July 19, Disney's live-action remake of The Lion King (starring Beyoncé as Nala) will have everyone heading to the movie theater. This means that everyone will be singing the songs from these films, even well into the fall when Disney On Ice's new show makes its way into arenas.

There isn't a better way to see a spectacular show featuring some of your favorite Disney songs and characters than in this brand new installment of Disney On Ice.