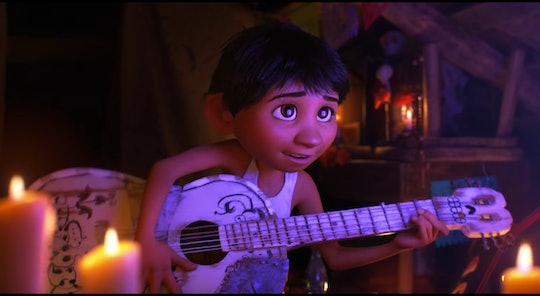 There is nothing more exciting than the announcement of a new animated film, especially when it's coming from Disney and Pixar. From Toy Story to Finding Nemo, Pixar films have been entertaining people for over 30 years, making the films an enjoyable, shared experience for children and their parents who grew up watching them. The latest film released by both companies, Coco, will do just that — just one look at Disney-Pixar's Coco trailer shows that the film will undoubtedly be full of culture and beautiful visuals that both parents and children will appreciate.

The first official trailer for the film stands at two minutes long and only hints at a possible storyline — but from the few scenes featured, it looks to be the start of one epic adventure. The film is much more than your typical Disney-Pixar adventure film — like Cars or Finding Dory; According to Entertainment Weekly, the film is "set against the backdrop of a musical journey" as well.

Coco is a major stepping stone for another reason: It features an all-Latino voiced cast and the film's plot and backstory is based in Latin culture. Based on first impressions, thanks to the film's first trailer, Coco appears to be a beautiful, colorful look into an oft-overlooked culture and a young boy's ancestry.

For now, the film's trailer will have to be enough to appease excited fans, as the full movie won't be out in theaters until Nov. 22.

According to Entertainment Weekly, the film's first official trailer is just a teaser of things to come, but it already sounds amazing:

[The film is about the] story of Miguel, whose obsession with music far outweighs his family's confounding generations-long ban on the craft. Dreaming of becoming a performer, the young boy visits the resting place of his idol, Ernesto de la Cruz, where he borrows the guitar hanging above his grave. However, because it's the Day of the Dead, his actions propel him to the Land of the Dead, where he'll meet his great-great-relatives and learn the history of his family.

Coco has a lot of anticipation surrounding it — not only for its plot, representation of culture, or music incorporation, but for its originality. According to The Guardian, Coco is Disney-Pixar's first film with an original plot line since 2015 (as opposed to the amazing sequels the studio produces) and will be the only non-sequel film from Disney-Pixar until another original film is released in 2020 — so, no pressure.

The trailer for Coco could not be anymore visually stunning and from the limited amount of knowledge we have so far regarding the storyline, it's likely the plot will be just as colorful. For those already anxious for the premiere? Don't worry. It will definitely be worth the wait.